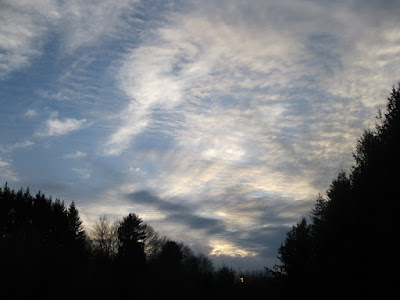 This last month of 2017 has featured nothing but unusual weather.  The flat water sections of the nearby Unadilla River have frozen solid three different times.  One of those bitter cold nights resulted in clear ice perfect for skating if it had been thicker.  We have been looking for some snow cover to insulate the plants.  Several consecutive forecasts consistently predicted a three inch snowfall for us.  The evening before the possible snow fall featured high closely spaced parallel ridges in the clouds.  It could have been that corduroy clouds were a sign of impending snowfall but nothing happened.  Our plants remained exposed to the bitter cold. 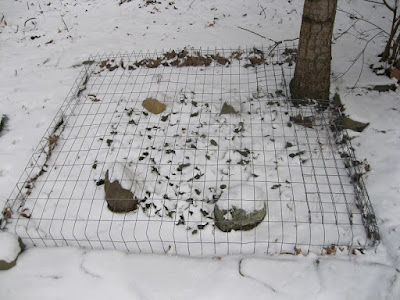 There have been several nights when a possible accumulation of one inch of snow have been forecast.  We cannot be certain that what little white stuff accumulated overnight was snow rather than heavy frost.  With the subzero temperatures spanning several days, the blanket thickened.  These arbutus plants had a generous cover of fallen pine needles and now some snow nearly completes the blanket.  Perhaps the next dusting will finally hide these evergreen plants.  Rabbit tracks were evident close by  but with the protective cage  these leaves remain uneaten. 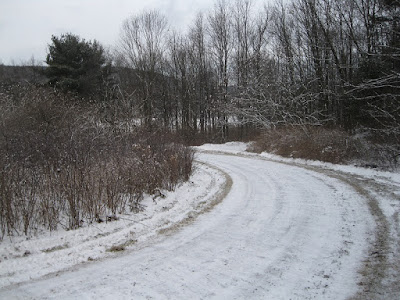 This first plowing of the lane was not really necessary.  Both the state and county road crews have been clearing and salting the roads but accumulations of snow are so thin that the plows have little impact.  I was faced with pulling two huge empty trash cans up the hill.  Two trips with the lawn tractor took care of the cans and it made no sense not to plow at the same time.  Besides, the plow on my lawn tractor is overwhelmed by three inches of snow.  I plowed wide since the next event will pile the new snow inside of the ridges made this time.  Plowing now also pushed aside some of the stones that came to the surface as rain water washed away the fines.  Having those stones gone before the snow blower is used is a real benefit.  The tools needed for shear pin replacement and new pins are in the tractor compartment but old bare hands in dry cold air bleed easily if bumped.  It is much better to avoid breaking the shear pins.  We are ready for another new year and we try to take some advantage of and enjoy each new day
Posted by Ed at 12:59 PM