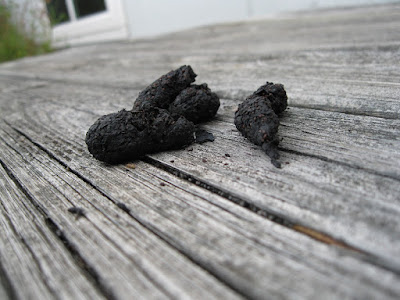 Advanced age has now limited how much time that we can be outside working in our gardens.  Native animals have always explored our ground but with our absence now really feel that this ground is theirs.  The doe dropped her twin fawns close to the stone wall directly in front of the house.  Her instructions to them were stay where you are.  We did not disturb them since their muscles needed time to firm up to the point where they could walk without injuring themselves.  This morning as I was walking toward the shed Mom and one of the twins held their ground as I drew near.  There were no hoof stabs into the ground or snorts directed my way.  Comfortable with my advancing presence, they joined the other twin and simply walked down the driveway.  More than one fox is commonly seen here.  Perhaps their level of comfort is overstated by this deposit of the remains of a wild blueberry meal placed directly outside of our front door. 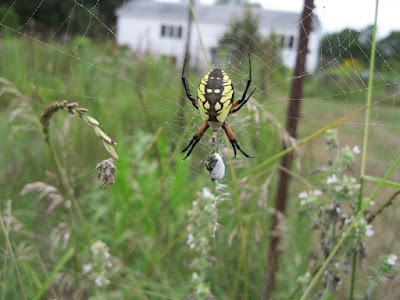 This huge fearsome spider has found a place to lay her eggs in our gardens for many years.  Our wire fences provide an airy anchorage where generous meals, like the one just beneath her, are common.  Many years ago, I was describing this frightening insect in the faculty room at school.  The science teacher was interested in adding a mounted specimen to his collection.  He made a home visit with his killing jar in his hand.  He sized up his intended victim for some time.  A stealthy approach was underway when the spider suddenly dropped to the ground with lightning speed.  The teacher was mostly airborne as he quickly exited the garden.  Fast and ferocious is a powerful combination. 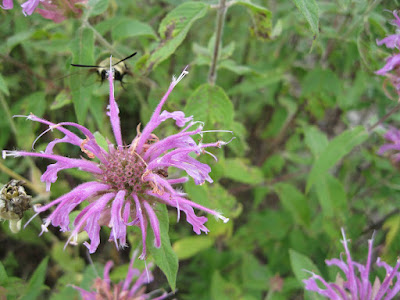 We placed a large planting of this purple  Monarda directly behind our bench in the shade garden down by the road.  Humming bird moths are fond of feeding on this plant and they are not troubled by our nearby presence.  That large yellow and black colored mass in the upper left of the picture is actively feeding.  Their wings are mostly transparent while those two black stabilizers clearly stand out.  Once again we have an insect that has no reaction to our presence. 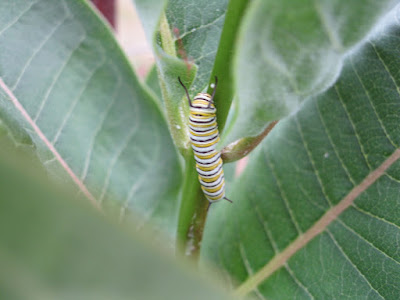 Our homestead is located adjacent to a  bend in the Unadilla River.  For anything that flies, the direct path downstream is straight over our home.  Migrating Monarch butterflies fly right over us every Fall.  We have encouraged the growth of Milkweed, the only food source for these caterpillars, in many places on our land.  This plant is growing where the planting bed meets the stone path.  Its roots are well below most garden plants so both coexist here.  The migration is weeks away so this new butterfly will be able to lay eggs that will produce new butterflies for that trek.  We find it wonderful to be part of helping this endangered treasure to stay alive. 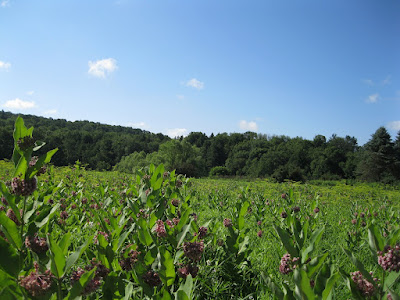 We found ourselves at our High Meadow this morning.  Recently Amy saw a Killdeer here.  It was the first time that she had ever seen this beautiful bird.  We have made two return trips but found it neither time.  Every visit here is special in its own way.  Invasive Japanese Honeysuckle has been removed from this level field.  On my seventy-third birthday I was provided with a machine that had a seat and a bucket for a weekend.  Acres of level ground saw this highly invasive plant removed.  To keep it gone I now mow huge fields.  It is time to stop the mowing this year since the Milkweed is in flower.   We recently came upon two Monarch butterflies joined together to transfer the seed packet that will yield eggs.  These leaves will be home to the next generation of caterpillars then butterflies.  So far the early mowings have kept the Honeysuckle absent from this ground. 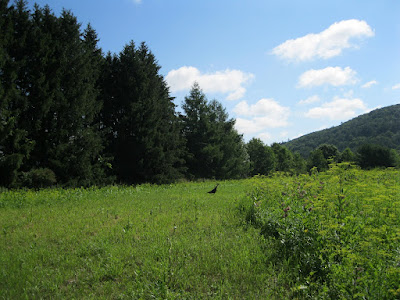 We have seen this turkey and her four young many times.  Yesterday they were taking dust baths under October Sky Asters planted right next to the corner of the house.  They have been spending a great deal of time rather close to the house.  Our concern for their safety remains active since the poults seemed too small to fly.  Turkeys spent the nights in trees where they are safe from predators.  For a period following hatching, both the young and their mother sleep on the ground.  We need worry no more.  Mom and her young were in the taller weeds in the center of the field when we first saw them.  Their reaction to our presence was to head toward the trees.  Our movement sent the group back into the taller weeds.  Soon the young appeared in the shorter weeds where they took to the air.  They found safety in the Pine trees.  Mother also flew but remained in the field possibly intending to keep our focus on her.

At my recent doctor's visit, I was told that most of the men born in 1944 are now dead.  I am still here two years after that dividing line.  This land and its peaceful connection to nature has been ours for the past twenty-eight years.  Age now limits my ability to do all of the physical work necessary to preserve this land but I absolutely cannot see myself living in a senior care facility.  How could anyone leave this wonderful life so close to nature?

Four Patches Of Mayflowers In July 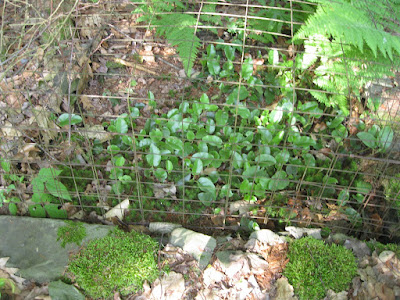 This is our only naturally occurring patch of that wonderful native plant also known as  Trailing Arbutus.  In the early 1960's the barn burned and the trash that the fire left behind was buried in this area.  A gravel bank was opened to expose material used to cover the remains of the barn.  This spot features the lumpy overburden that was pushed aside.  As difficult as it is to believe, this tiny patch of green may be fifty years old.

When we first found it we knew nothing about it other than it had sweet smelling flowers in April or May.  Some years we found and enjoyed these blossoms while other years no trace of the plant could be found.  What we eventually learned was that this evergreen plant exposes its sweet tasting leaves following snow melt.  Rabbits are particularly fond of feeding on these leaves.  Despite this damage, the plant used the next three years to reestablish itself and flower.  That explains the wire cage that covers this plant.  The dry stone walls surrounding the cage have to date made it impossible for hungry animals to push the cage aside or slide under it. 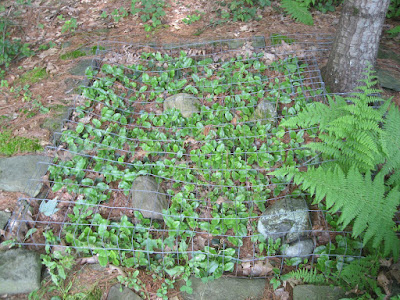 This area features our first successful transplants and a from seed plant that grew in the soil clump moved with the plant.  Arbutus is described as impossible to move in many books but we found success.  Our understanding of this plant when we moved it was limited since we were unaware that it exists in both genders.  Pure luck gave us three pollen producing plants and one that grows seeds.  The dense leaf growth here makes it impossible to know if any other plants grew from the seed produced here.  Leaf growth has reached the limits of the covering cage and we have no plans to protect these exposed plant parts. 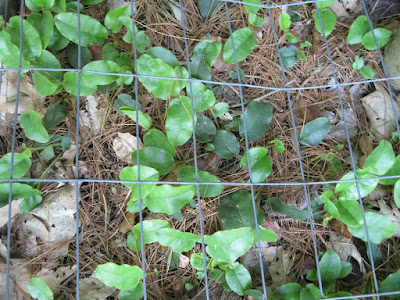 This closeup is intended to show the difference between the new light green leaves that are new growth this year and the older dark green leaves.  We still do not understand the life cycle of these evergreen leaves.  At some point in time some must die but we seldom see a dead leaf.  One may be visible in the second wire rectangle from the left in the center row but we have no way of knowing its age.  Their general appearance may be hidden beneath the vigorous new growth. 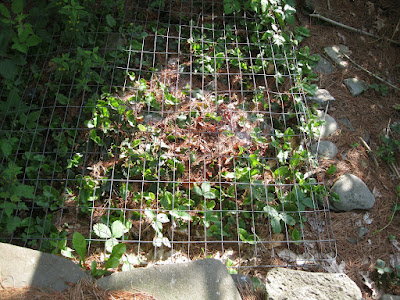 Our second successful attempt to transplant can be seen here.  When these four pollen producing plants and two seed growing plants were placed here, we gave them great care.  Fallen White Pine needles were singularly removed so that the Trailing Arbutus leaves were fully exposed.  Recently we have limited our intrusion of the natural turn of events since we want this to be a wild native plant.  This tree suffered great damage from the late heavy snow storm and the Arbutus plants are nearly covered with fallen pine needles.  This cage will be temporarily set aside so that the heavy load of pine needles can be lightened. 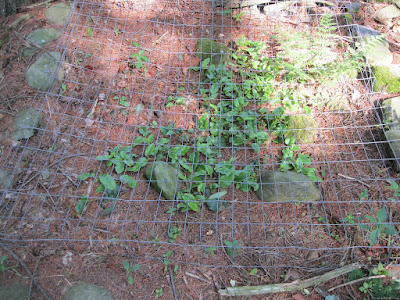 When we were digging transplants, we disturbed a tiny cluster of possibly five plants.  These were placed in the corner of our first patch.  Two or three years later exactly two plants remained alive.  They were placed here adjacent to the property line under a huge White Pine.  As luck would have it, both genders are present.  We brought no soil here as we wanted these plants growing from a deep deposit of rotted pine needles.  They are doing well sending out long pieces of new growth.
Trailing Arbutus plants form their blossom buds ahead of winter.  Our next set of pictures will focus on new buds.  This year weather was harsh when the open flowers were expected so we eagerly look forward to next year.
Posted by Ed at 11:50 AM 1 comment:

Flowers In The Wild 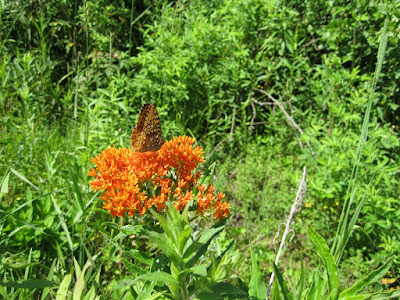 When this rather poor farmland became ours twenty-eight years ago, we were in our fifth decade of existence and capable of hours of physical labor in intense sunlight.  Sod was removed and stacked to compost.  Stones were sifted from the soil and used to build weed free paths.  Tired but happy was the rule of each day.  Our present loss of function has totally changed our garden.  This Butterfly Weed plant may have planted itself here.  We remember trying to establish purchased plants with mixed results.  This plant may well be self planted from seed.  It is at the end of a planting bed in full view from the living room window.  Many recent days find us watching this Aphrodite Fritillary butterfly from the comfort of an airconditioned room.  As I was being driven inside by the oppressive heat, I  stopped for this photo. 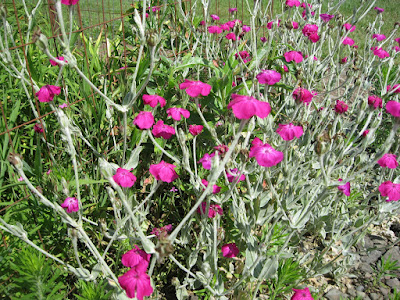 Rose Campion is a beautiful but difficult plant.  Its brightly colored flowers are backed by a silver green colored foliage.  It is a biennial with a low rosette of leaves as its first year of growth.  A long tap root makes transplantation difficult.  We have been content to let these plants grow where they please.  In time small sifted stone paths become filled with composted plant parts and minerals from the stones.  Many plants seem to prefer this mixture as a place to grow.  We happily walk around these beauties to use our garden paths. 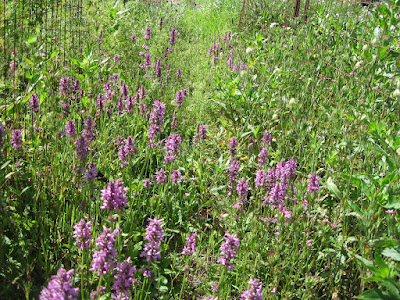 This view is looking straight down a thirty by three foot stone path.  No stones are visible despite their six inch depth.  Wood Betony is another purple color flowered plant that has been popular here for decades.  Planted in our carefully prepared soil, the plants grew but did not flourish.  These plants are all escapees from our stone free planting beds.  They find something in the path ground that was missing from the soil that we created.  We intend to clear out some of the weeds while doing no damage to these special plants in preparation for next year's display. 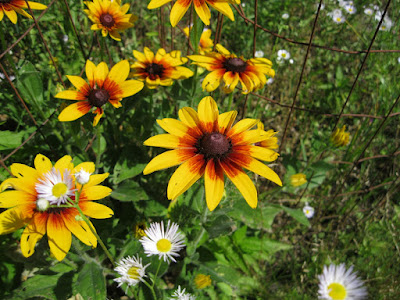 Elle gave us these Gloriosa Daisies years ago.  As she said would happen, many plants returned to yellow only petals while some of the brightly colored flowers persist.  We are moving along in age ourselves with no plan for what comes next and find some comfort from these past gifts.  Many different plants in our gardens came from Elle  They always bring to the front pleasant memories.