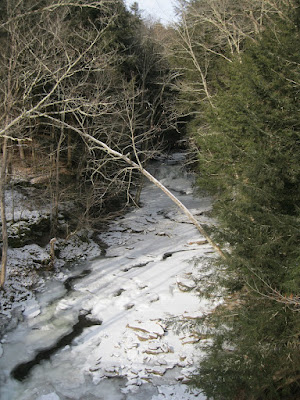 Our winter has been unusual in several ways.  January is half gone and we have yet to see a significant snowfall, but an ice storm of some size did make walking and driving treacherous.  Today and tomorrow will both feature below zero temperatures.  That fact is what pulled me into the great outdoors for pictures of a frozen waterfall and a partially open stream.  This stream has had a strong pull on me to explore it but the steepness of ground has kept me away.  So this view from some distance and a safe return to our home is all that we have. 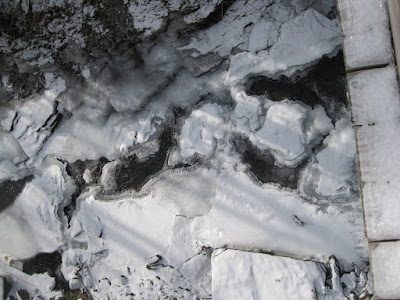 We have lived in this area for decades but have shown little interest in local history.  It is possible that this rather small stream is named Fred Smith Creek.  Actually Kent Brook is the name of the stream while Fred Smith's name was given to the adjacent road.  Geologists from various colleges have spent time exploring various natural features, but to my knowledge have never focused on the entire Unadilla River.  Having read some of their publications, I have an opinion about the formation of this stream.  It drains a small area and natural drainage would have never cut this steep sided gorge.  Glacial meltwater would have created a volume of water that would have been able to open this feature.  That this stream is little known makes it all the more special to me. 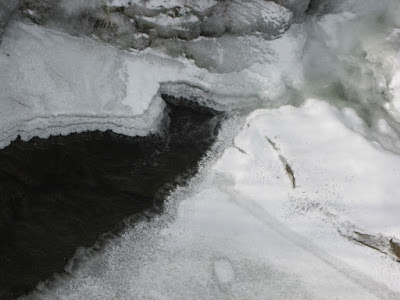 Running water and forming ice sometimes create visually interesting features as shown in these two pictures.  Some small measure of common sense and a very steep bank have so far kept us safely away. 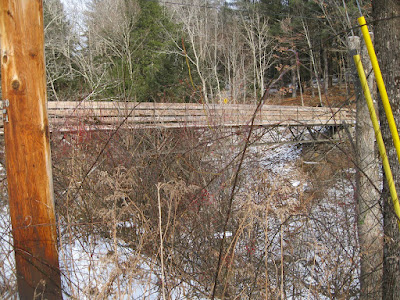 Recently, this new bridge appeared where a former bridge was demolished and not replaced.  Low traffic here made replacing what had been a single lane bridge financially irresponsible many decades ago.  The original stonework for that long lost bridge is visible under the end of the new footbridge.  I could not understand how local government would spend the money needed to build this foot bridge.  Very little was done to provide parking for the cars necessary to bring pedestrians here and this area is thinly populated.  Only questions remain. 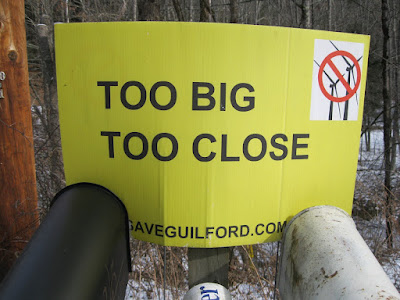 The Town of Guilford has captured and held the attention of a business looking for an area to erect windmills larger that any presently in use.  Few pay attention to the operation of local government until its actions threaten life in the community.  These numerous huge windmills have captured the attention of our locals.  Government approval followed by disapproval has not marked the end of the project as shown by these new signs.  It may be that the windmill project has not breathed its last breath here.  Some guilt is felt by using the bribe bridge to take my pictures, but it is there and the otherwise hidden stream can now be seen.  Other footprints were left in the snow cover ahead of my visit today.  It will be interesting to see just what happens next but I expect that the end of the issue is not in sight.

The events that prompted this post happened in a moment so no pictures exist.  For the first time a post will be of necessity limited to words.  I was a child of the 50's growing up eight miles south of Ithaca and Cayuga Lake.  Each fall huge groups of geese flew overhead as they migrated.  The distance from the lake, where they spent the night, to my home in Newfield allowed them to form perfect V shaped groups.  Their altitude prevented me from hearing their sounds but the sight of their formations made a lasting impression.  Bald Eagles were never seen by me then.  Their return from the brink of extinction placed them at the top of my must see list.

Recently we frequently see both mature  and immature Bald Eagles.  Our home is very close to the Unadilla River and we believe that at least one nesting pair frequents our area.  One winter during a massive but peaceful snow storm, I was using my lawn tractor to plow snow.  The snow flakes were huge falling through windless silent air.  A mature Bald Eagle flew just above my pine trees toward me and for a brief moment we were together alone.

It was nearly a decade ago when a three hour drive along the Delaware River took us to a public park where we could see an active Bald Eagle nest.  We spent most of several days driving to where we could watch these magnificent birds raise their young.  A student described the location of a nest near us but I was never able to find it.  I am constantly scanning the ridges bordering the Unadilla River looking for a nest tree.  To date nothing has been found.

Yesterday Becky and I were crossing the river near the Tall Pines recreation area when tumbling  eagles separated extremely close to our car, the ground and the surface of the river.  We are absolutely certain that we witnessed the end of a long fall with the two birds joined by their talons.  This activity is part of their mating ritual and we were fortunate to see the last moments of it.  The movie Continental Divide contains extensive video of Bald Eagles flying in the Rocky Mountains.  Included in that film is video of a pair of almost joined eagles.  What we actually saw here has to be a once in a lifetime experience.