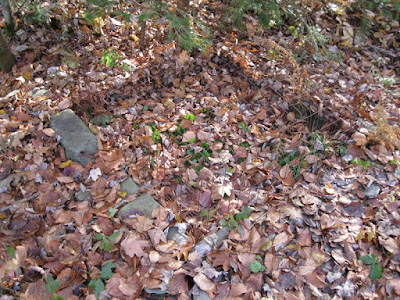 As October draws to a close, the sights and sounds of man fighting fallen leaves are common here.  If left to winter over where they fell, a slimy sodden mess will be revealed when the snow cover finally disappears.  Clearing leaves on a bright fall day has pleasant components.  Lawns are light bright green when the leaf cover is quickly pulled away.  A pleasant scent unlike any other fills the air at this time of year.  Cold has ended most of the annoying flying insects by now and pleasant days outside are definitely limited at this time of year.  We do not have lawns to rake but in some places the leaves require attention.

Arbutus is an evergreen plant that cannot simply sleep until spring.  Sunlight to some degree is needed to maintain its life function.  Our first discovered wild patch of arbutus grew on a steep slope that was becoming home to birch trees.  Despite the steep north tending slope, fallen leaves did not clear and the arbutus were smothered under their deep dark cover.  Wild plants finding death is a natural process.  Human intervention is short term but is all that we can do. 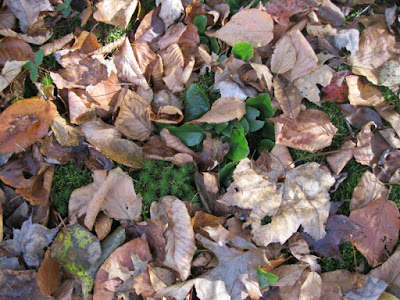 These plants found their location without human meddling.  They grow in the lumpy overburden that was pushed aside more than a half century ago to open a gravel pit.  We have known about the location of these plants for years but sometimes we could find no trace of them.  Two winters ago I discovered tell tale signs that a rabbit was eating these plants.  That is yet another peril of being evergreen.  When the weather warmed, a protective wire cage and a field stone wall were placed to protect the remains of these plants.  Recover they did but now fallen leaves threatened to end them once again.  Human hands had to intervene. 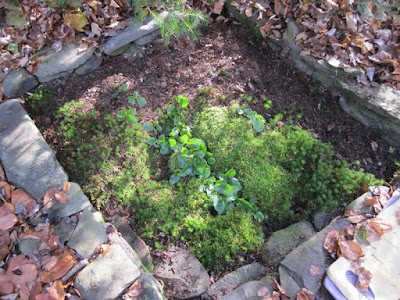 With the cage set aside, fallen leaves were gingerly removed from the recovering arbutus.  All of this regrowth is one year's work since the foraging rabbit left no sign of a leaf anywhere.  Flower buds were found on larger pieces of new growth.  This surprised me since I expected two year's of regrowth would be required before flowers would be seen here.  The wire cage is back in place and low sunlight is once again nourishing the desired plants.

What will happen to these native treasures when we are forced to leave this land is uncertain.  Without someone to clear them, the increasing load of  dead leaves will likely smother these arbutus.  When this happens it will be a natural process that our actions were only able to delay.  As it is, these plants are back and their flowers will be enjoyed when the snow finally disappears. 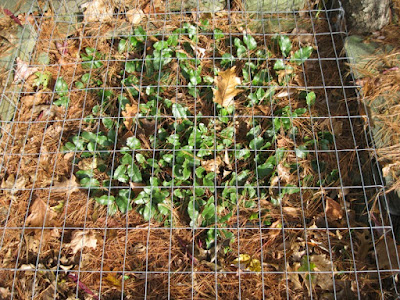 This is the present state of the arbutus that were transplanted here four years ago.  Their wild home was on a ridge that had recently seen its forest cover cut.  Exposed to unrelenting daylong sunlight, these plants managed to modify and adjust.  Only tiny sunburned leaves grew close to the ground and flowering was profuse.  The four transplants have undergone a complete transformation in their new location under a white pine tree.  Longer taller leaves extend far above the litter of fallen pine needles.  An occasional oak leaf will cover and smother an individual arbutus leaf  but the plant will survive.  The wire cage must remain to protect from foraging rabbits and woodchucks.  The plants have reached the limits of the cage and we will watch to see how the stems deal with the barrier.  If the growing stems push past the wire cage, the new growth will be exposed to danger.  Natural pruning will likely occur but the bulk of the plants will be protected until the wire rusts away. 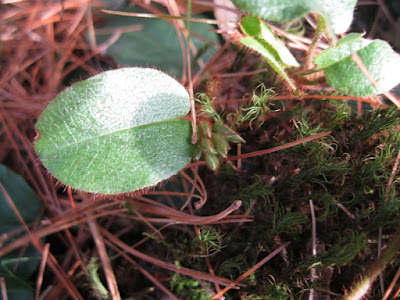 These six new flower buds hold the promise of memorable scents next spring.  Their seed will provide an opportunity for a natural increase in the number of plants here but the laws of nature will rule.  Some may survive and some will be eaten. 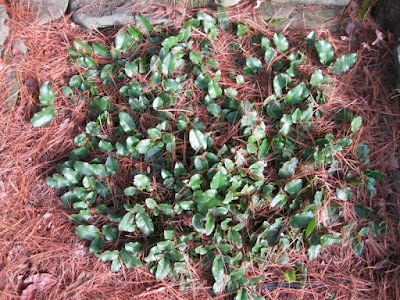 These four transplants have brought to me pleasure that is beyond description.  Having them survive transplanting and watching them prosper here has been great.  They do set seed so there is always hope that they will increase in number .
Posted by Ed at 5:32 PM 2 comments:

Some Of My Plants Are Old Friends! 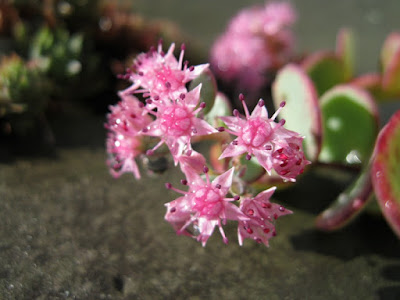 Many of the plants in the stone wall garden are very old friends.  While we may find a passing fancy in the new things that come along, it is the plants that we have cared for over the years that mean the most.  This pink sedum, Sedum sieboldi, originally came from a single small plant purchased on a visit to Caprilands in 1993.  It always blooms late in the season here, usually sometime in October. 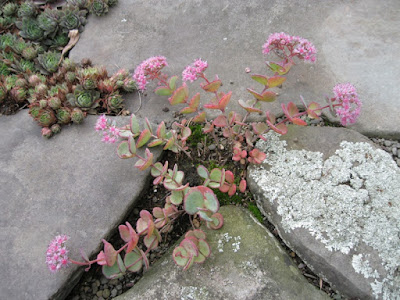 This one is planted in the top of Ed's curved stone wall.  The hard freeze that we had has begun to turn the leaves pink, but the flowers still have their lovely aroma.  It's a real treat for the senses when so many of garden plants are dead or dying back. 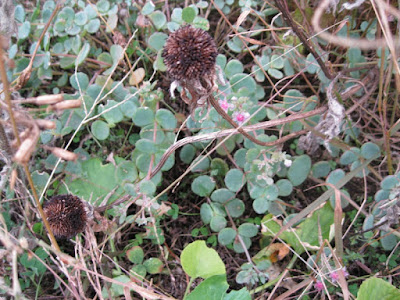 I have three of these plants at the moment.  Planted near Ed's stone walls, this one is still green and just beginning to bloom.  It also has some weed cover that may offer some additional frost protection.  That could be baloney of course, but it makes me feel a little better about seeing a plant I love so much surrounded by weeds. 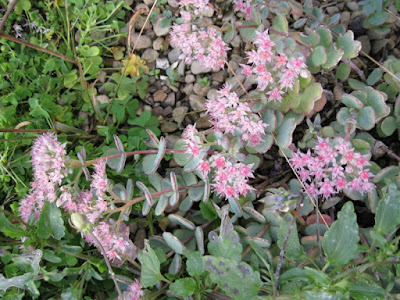 The third plant looks very nice with lots of pretty pink flowers.  Ed took special care to place this plant this spring. You can see his carefully sifted gravel at its base.   The neighboring weeds here are not yet huge.  As the weather continues to turn cold these plants will die back to ground level.
After 22 years I have formed quite an attachment to this plant.  It is one of my garden treasures.  If the plants do well this spring perhaps I will divide one to share with friends.  After all this time, I would like to keep this pretty pink plant going and going and going!
Posted by Becky at 5:37 PM 2 comments: 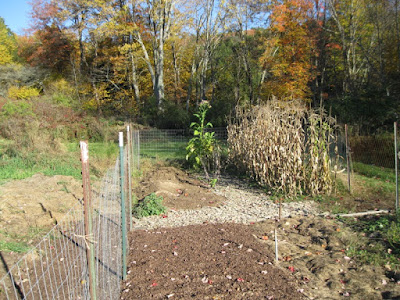 When we ventured out yesterday morning, it was soon obvious that the garden had been lightly touched by frost for the first time this season.  Cold pours downhill following the low ground to a final fall to the river.  Ground hugging pumpkin leaves were burned brown while the parts of the same plant that had climbed the side of the compost bin were still green.  Heliotropes near the house remain in flower while those nearer the frost river have been blackened.  We usually have a September frost and this late first appearance gave us an extra two weeks.

The carefully weeded bed that runs to the stone path now contains 270 garlic cloves.  They are covered with a ground leaf mulch that followed contact with the nylon string trimmer and a coarse wire screen.  This fine covering will delay early weed emergence giving the garlic a head start.  By harvest time the leaf mulch will have decomposed becoming part of the soil.    A similar approach last year brought the garlic to harvest with a single weeding.  Adjacent beds require attention that will follow now that the Fall planted crop is in the ground. 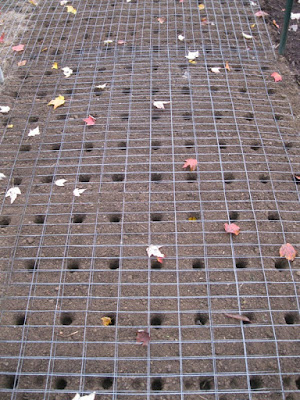 A carefully spaced planting grid was defined using the pieces of wire fence that usually surround the garden.  A second section of fence was used with the long spacing set across these pieces.  Squares 2 inches by 2 inches then covered the planting bed.  In a row, push a hole then skip two squares to the next hole quickly defined ten planting holes per row.  For row spacing, the procedure was from a hole skip three squares before making the next hole.  My purpose in writing this here is so that I will be able to read the plan next year rather than needing to figure it out by trial and error as was done yet again this year.  Dimples visible at the bottom of the photo attest to my first misplaced attempt.   This is rather close spacing but I can work a weeding hand between the rows.  My plants might produce even larger bulbs if the spacing was more generous. 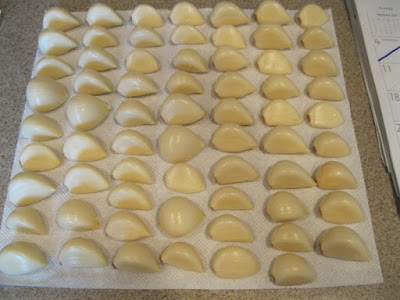 We are still soaking and peeling our cloves before planting.  These sixty cloves are free of the evil brown rot.  Nearly all of them should grow to maturity.  This garlic was given to us last year by our good friend Helen.  She lives in the village house that belonged to her grandmother.  Adjacent to the Susquehanna River and tended for generations, her rich soil produced an impressive crop.  It is possible that we gave her the seed cloves that she planted but none of us can remember for certain.  The twenty cloves planted here last season all grew large bulbs that appear different from anything else that we plant.  The name Helen's has been assigned to this garlic.  It is the best that we have and it was the first to be planted.

Two rows of Purple Stripe were planted next.  It is different in appearance than the porcelain types that we widely plant.  Purple Stripe is a shorter more compact plant with more leaves than the others.  This visual difference helps keep the varieties separate at harvest time.  Purple Stripe does produce a larger number of cloves per bulb but many are small and doubles are common.  These remain available for cooking since we only plant the best. 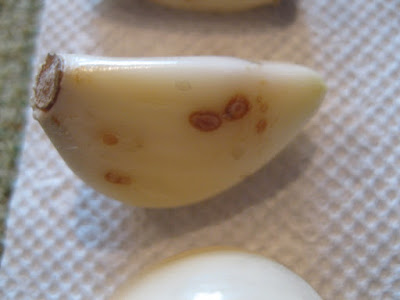 The brown rot seen here is why we peel our planting cloves.  This small amount of rot is undetectable when popping cloves but if planted a diseased plant would appear for only a short time.  We try to keep our soil clean by planting only clean cloves.  Since we are still seeing rot we need to continue soaking and peeling.

White Bishop is the next variety planted.  Here again we assigned the name to this variety.  Anyone that has attended the Saugerties  Garlic Festival has encountered local grower Charlie Bishop.  He sells his garlic there with a continuous carnival barker's banter that never fails to draw a spending crowd.  He is a frequent source of seed for us as that gives us a chance to talk with him, gleaning the latest tips on growing garlic in the harsh climate of upstate New York.

Two more rows of Purple Stripe separate the White Bishop from the Richfield Springs.  Here again we assigned the name that identifies the original source of the seed.  This garlic was horribly diseased when purchased but we are making progress in cleaning the stock.  Nearly half of the cloves were diseased this year but none showed the huge blue fungal masses so common last year.

Three rows of Susquehanna White were planted next.  Two rows of Lambs Quarters finished our planting.  All of our stock is from local growers.

This may be our last season growing garlic.  We have placed our names on the waiting list for an apartment.  Finding suitable senior housing has proven to be a real challenge.  Income limits exclude us from a huge number of area apartments.  It seems that most developers prefer a subsidized but guaranteed profit over a free market risk.  That reality leaves those who have been financially responsible for their entire working lives lost between facilities that cost more than five thousand dollars per month and subsidized housing where our income excludes us.  So we wait.  When one of the present tenants dies or is forced to go to a home, we might have a chance at an apartment.  In the meantime the garlic is planted and we hope to still be here at harvest time.
Posted by Ed at 6:32 PM 1 comment: 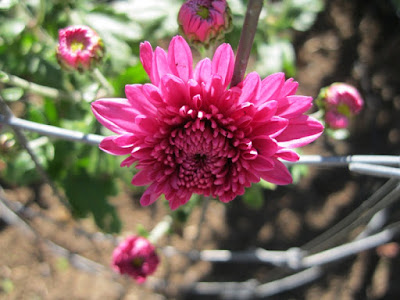 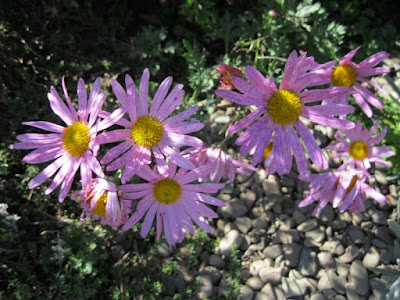 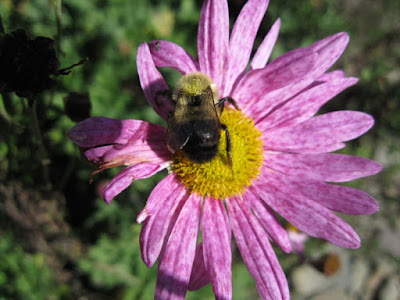 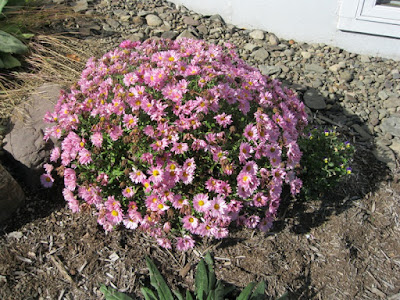 Mammoth Pink chrysanthemum
Posted by Becky at 9:31 AM 1 comment: