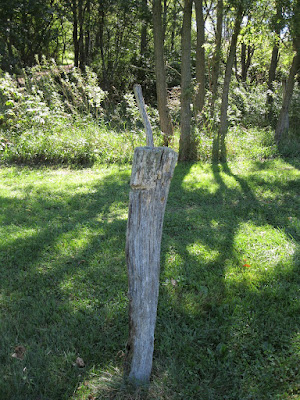 When we purchased this land twenty-eight years ago, it was surrounded by a perimeter fence.  No active farming had been done here for several years before we arrived on the scene.  We worked to remove all of the fences from the interior and what remains is old and weathered.  The two posts in this photo mark the edge of an area owned by the family now living in the farmhouse.  Since they mark the location of our mutual property line, these posts must remain.  When I last mowed here a few days ago, my mower deck edge contacted the post breaking it.  The shortened post was reset in the original hole but is now about two feet shorter. 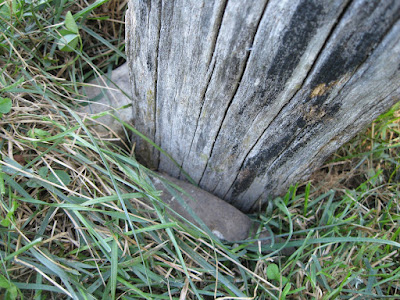 We make it up as we go along since neither of us were raised on a farm.  When the broken section was gently removed, we discovered stones at the ground surface had been placed to keep the post solidly upright.  The hole was enlarged slightly in order to remove the broken section.  The lower section of the original post was tapered making it much smaller than what was to take its place.  The shortened post nearly filled the available hole but wiggle it did.  Stones are a frequent  item in our ground so there was a small pile resting nearby where we intend to garden.  A quick look identified two likely candidates to fill the holes.  Stones tapped down to rest just even with the surface of the ground made this nonfarm boy proud.  All of that time spent building stone walls and patios developed a skill to judge just how large a stone is.  To say that I was proud of this repair is a huge understatement. 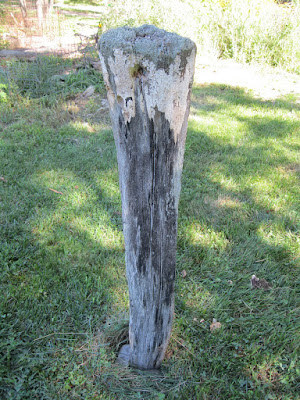 Most fence posts are driven firmly into the ground with several blows from a sledge hammer.  That sort of contact would have destroyed the lichen and moss growth evident here.  It likely would have also shattered the remaining post.  As it is, this old boundary marker looks like it has been in place for years and will most likely outlast me.