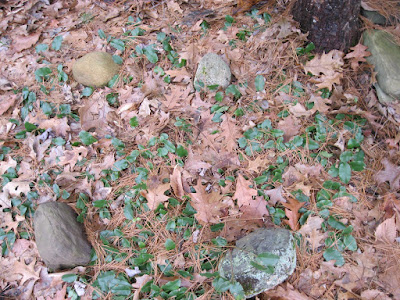 Lasting snowfall found us early this year.  Tasks that are normally completed in early December were hidden beneath the snow.  When warm days and clear skies finally returned we had a chance to get some of the needed work done.  Arbutus is a native wildflower that might be expected to make it on its own.  These plants were moved here and placed in a location of my choosing.  That left me responsible for seeing to it that favorable conditions prevail.  This spot under a white pine tree seemed perfect.  Pine needles decay producing the very acid soil necessary for Arbutus growth and this ground was near the driveway.  Small detours when getting the mail allowed frequent visits to these plants.

Also nearby are several oak trees.  Oak leaves also decay into highly acid soil but they remain whole for a long period of time.  My concern is that oak leaves will totally block out sunlight denying Arbutus leaves the light that is necessary to keep the plants alive.  So on a pleasantly warm day, the protective wire cage was set aside and the oak leaves were singly picked up and moved away. 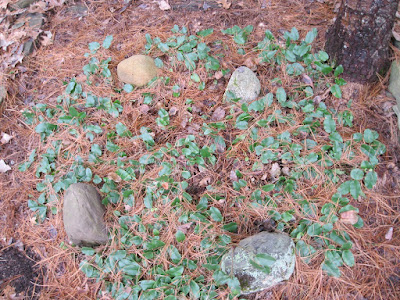 In a rather short time, a large number of evergreen leaves were exposed to light.  The fallen pine needles were left undisturbed since a pine needle cannot block out sunlight.  There may be some protection from severe cold by the layer of freshly fallen pine needles.  When the leaves were gone the wire cage was returned thereby keeping rabbits and others from feasting on our Arbutus leaves. 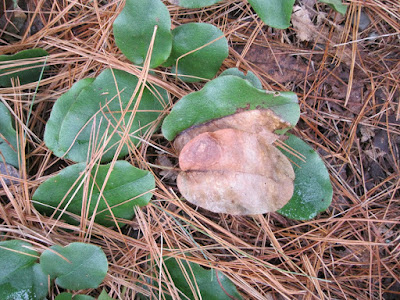 Arbutus is an evergreen plant but we had no knowledge about the expected lifespan of a single leaf.  Since nothing lives forever, we wondered how long it would be before we saw naturally dead leaves on out transplants.  We still do not know the expected lifespan of an Arbutus leaf since the pictured dead leaf did not die a natural death.  A thick mat of oak leaves covered the dead leaf.  The half dead leaf was partially trapped under the totally dead leaf.  It is quite possible that these leaves died as a result of being smothered. 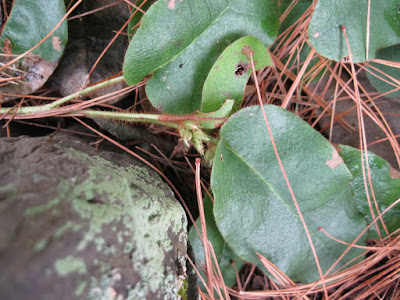 Arbutus forms its flower buds late in the summer.  Being first to flower means the buds and the tender flower within must survive exposure to winter's worst.  Aside from removing fallen oak leaves, these buds were left alone.  Their location near the stone will likely produce an exceptional photo in just four months.  As the days grow shorter and the weather turns bitter, we need the promise of delightfully scented flowers in a relatively short period of time.
Posted by Ed at 3:41 PM No comments: 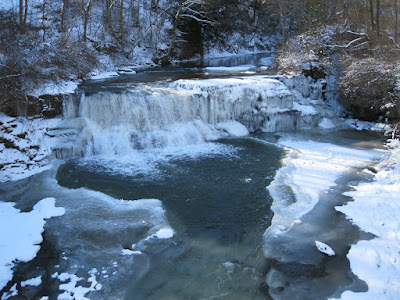 This natural treasure can be easily seen from the Quaker Settlement Road bridge near the intersection with NYS Route 80.  Finding a safe place to park at this time of year is another issue.  Driving into the plowed snowbank is not usually a smart move but the uphill climb going in made backing out easy.

Little remains of the early settlement here.  This part of New York State was settled by people moving southward from the Mohawk River Valley forming the L shaped lowland.  River transportation to this general area made the trip from New York City possible. Steep hills limited the potential of this specific area making travel in or out difficult.  This eight foot waterfall still shows signs of is use to power an early mill.  A channel was cut into the bedrock above the falls directing water flow toward the somewhat open area to the right.  Only occasional chunks of well rusted metal mark the likely location of the mill.

This highway bridge marks the limit of my exploration of this stream.  Pleasant Brook makes a long occasionally steep drop to the distant Chenango River  where wide flat valley farms still exist today.  More waterfalls are likely to exist near here but no safe legal access presents itself.  Falling down while trespassing is a totally no win situation but different seasonal pictures taken from this bridge still might be seen here in the future. 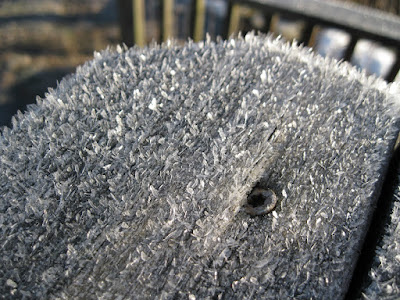 The railing outside the kitchen door was frosty this morning.  The chill outside in the garden made it a great day to stay inside and play around with photos of Fringed Polygalas.  We will not see the real thing until April or May but native wildflowers are our current obsession. These tiny pink orchid-like flowers make me smile every time I look at them! 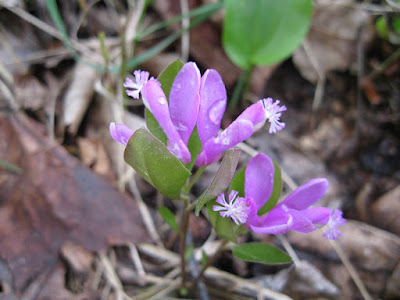