Just A Little Off The Top 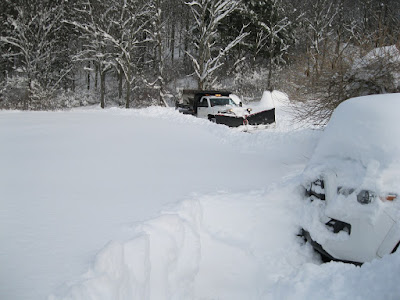 By now the storm is old news but this is the first day that we have full internet service.  Our feelings of isolation were quite severe.  Our nearest road is nearly one quarter mile away with our snow removal machines rendered useless by the depth of the snow.  The old reliable snow pusher cleared a path from the kitchen door to the generator.  Its air intakes and exhaust were at the top of the must do list.  Next a narrow path was opened down each side of the car.  Finally Ben and his mighty truck arrived.  It took him some time but soon enough we could reach the road. 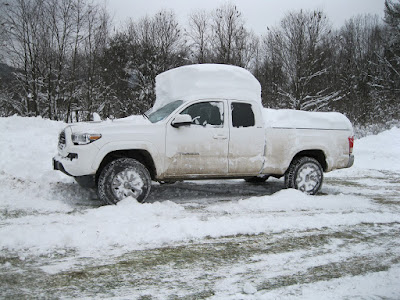 Similar narrow paths freed the truck.  Peering through a small area of cleared windshield, I  put the truck in 4 wheel drive and blasted free from the deep snow between the truck and the plowed ground.  While I continued to plow, Becky cleared off the truck hood.  The hand snow pusher rather easily cleared the roof of the truck.  Our garden tractor converted to snow plow has no space in the shed.  It was no small task to change that huge round white lump into a useable plow. 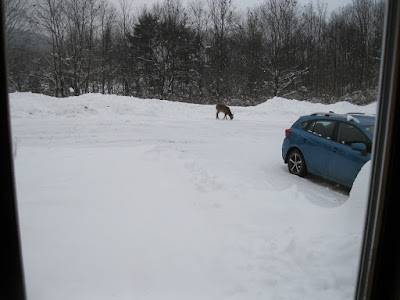 With open ground cleared by the plow truck, my snow blower was able to open more ground near the car.  A major concern here is where do we put the snow following the next storm so the cleared area is rather large.  We did not see any of our deer until yesterday when four appeared in the front lawn.  They pushed along in belly deep snow making slow progress.  Then one of this year's fawns decided it was time to use a series of jumps to more quickly move to the apple trees.  The rest quickly followed but food was hard to find.  On the other side of the house we always clear an unnecessarily large patch of lawn.  Prior to yesterday's dusting of new snow, a sizeable group of slate gray juncos eagerly fed on the cleared ground.  Later in the day this deer found relatively easy access to grass.  This morning deer could be seen in the darkness before sunrise right outside the kitchen window.  Our feelings of isolation are gone.