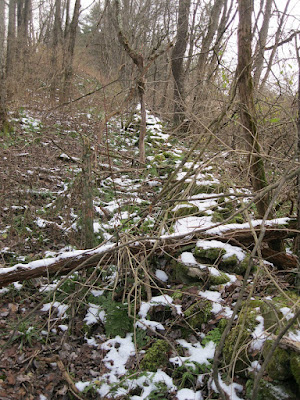 We have reached a corner that is adjacent to rich river bottom land.  Once again the border of our land is defined by stone removed from the field.  This line is less than straight and to the right is a huge mass of simply dumped stone.  Fallen leaves have rotted to become soil in the more than one century that has passed since stones were placed here.

A more recent event can also be seen in the top left corner of the photo.  The original farm barn was struck by lightening and burned to the ground about 1960.  The remains of the fire were hauled up the hill and dumped here over the edge.  When the fire debris was all placed here, what became the gravel bank was opened to provide fill to cover the mess.  When walking here an occasional encounter with protruding metal happens. 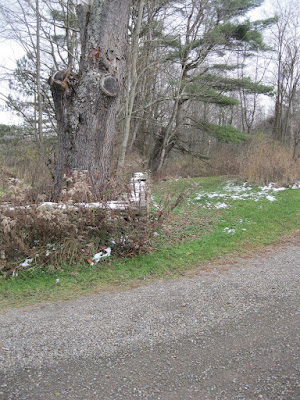 This is the view looking Eastward along this end of the property line.  The stone work is mine and my goal was to rebuild the original wall as far as the White Pine tree.  The steel pipe that was driven into the ground to define the property line is peeking up out of the wall.  The reconstruction of the wall was carefully done to preserve the original placement of this marker. 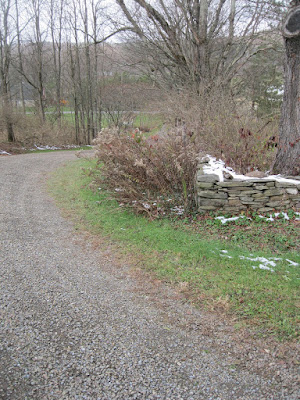 Looking to the North one can see more of a decent stone wall and a much improved Gravel Bank Road.  Goldenrod growing here along with wild berry canes really need to be removed. 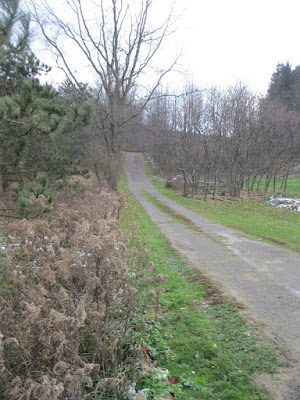 Here we have returned to River Road.  The driveway is much improved from what we originally found.  Adjacent to the hill is another place where stone cleared from the field was simply dumped.  A bend in the road was needed to get around that pile.  Much of that removed stone was used to the build the wall just out of sight to the right.

At this point our land is only forty feet wide.  The right turn onto the lane is where our homestead opens up to its thirty-six acres.  The original farm contained a long stretch of desirable river bottom land that was sold first as house sized lots.  The retreating glacier left behind many interesting land forms up our hill creating an attractive site for a primitive homestead.  We have called this land our own since 1994.  Perhaps the time is approaching when this treasure should be placed in the care of younger people. 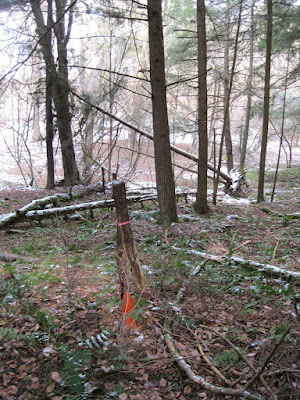 The original 130 acre farm here was defined by only two straight lines that met at a right angle and the Unadilla River.  Here we are looking to the North at part of one of those original property lines.  This is the longest straight line that defines what is ours.  The retreating glacier deposited many different appearing land forms here.  The bedrock ridge is behind us and is disappearing into glacial till.  Ahead of us is higher ground that is entirely glacial material.  The visible depression carries away a steady water flow that oozes from the bedrock.  From the first time that I walked here, I wanted to build a stone dam to form a respectable sized pond.  That project remains only a dream. 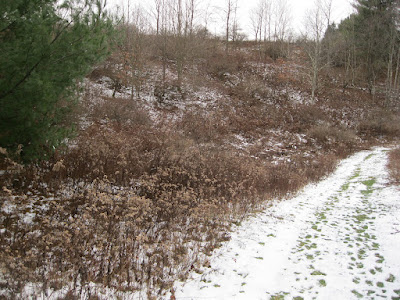 This depression was formed when a large chunk of the glacial ice fell into meltwater.  The till dropped here covered the ice creating a long level land form.  Eventually the ice melted and the soil dropped into the resulting hole.  A Dead Ice Sink is frequently filled with water but this area contains a deep deposit of sandy ground that quickly carries away water. 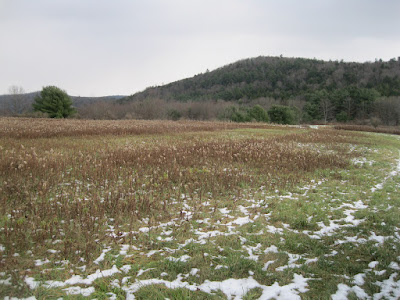 This picture is looking Eastward toward the Dead Ice Sink.  It shows the long soil deposit that may be the highest ground that we own.  To me it looked like the level deck of an aircraft carrier since the ground sharply falls away in all directions..  To the right several lower and smaller fields can be found.  This ground was drier and was used only as pasture for the dairy cows.  Views of the ridge are spectacular and we still spend a great deal of time walking here. 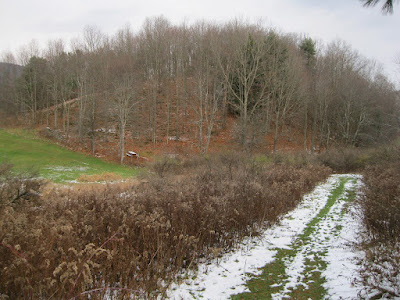 Our property line crosses this feature as the land drops away on the far side.  We have always referred to it as the Gravel Bank Hill since a gravel bank was opened there about seventy years ago.  When we purchased this land the highway crew of the Town of Unadilla yearly took away enough gravel to cover the taxes on the remains of the original farm.  That arrangement ended when we acquired this land. 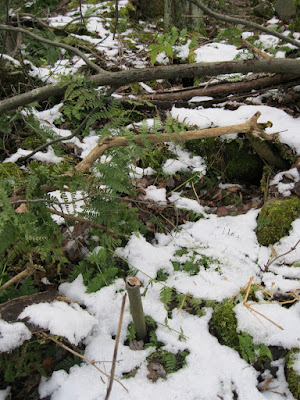 The Gravel Bank Hill drops sharply to river bottom land.  Walking that property line when some snow covers the ground would be risky so we will have to imagine the sharp drop to this pipe that marks the end of our walk to the North.  A left turn will have us walking to the West. 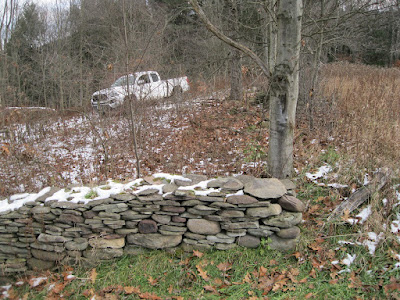 This is the view while standing on the Southern end of the lane looking to the East.  The truck is ours while the opposite field belongs to others.  Here again the exact location of the property line is hidden.  The neighbor's land was part of the original farm and was cultivated.  That activity placed stones at the edge of the field that obscure the new property line.  Our land here is on the location of the disappearing bedrock ridge.  That stone composition prevented farm activity leaving this area untouched by human activity and home to very old trees. 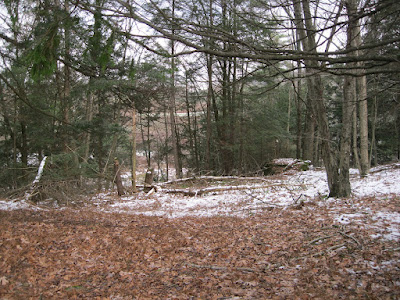 This is a view looking to the North.  Everything seen here is ours.  The distant patch of snow cover shows part of the level kame terrace deposited by the retreating glacier.  The huge piece of stone to the right is a broken chunk of the bedrock dropped here by the melting ice.  We find walking in this area tremendously peaceful but our path has established a trail.  Wildlife also use our trail. 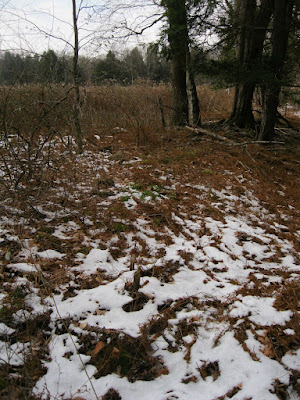 This area marks the location of a minor change in the direction of the property line.  When the last man to farm this land was selling off pieces of it, he used sections of iron pipe driven into the ground to mark the location of new property lines.  In the foreground a piece of pipe can be seen.  When the recent sale of this land happened, the surveyor could not find the pipe as a huge growth of ferns kept it hidden from view.  The small tree near the left edge of the photo is where he put his metal pipe.  He also used a taller wooden stake to make it possible to find the property line.  That placement gave me more land but it really makes no difference since all here prefer this land to remain wild. 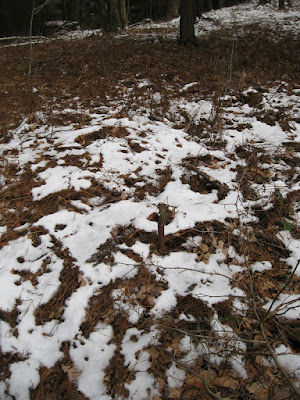 This photo shows the view from the original pipe looking to the East.  The property line drops downhill  as it heads toward an area filled with smaller glacial deposits.  The farmer ran a single strand of barbed wire across the ground to mark the location of the property line.  A hiker must pay close attention to avoid tripping on this wire. 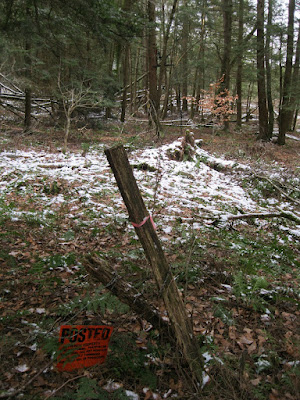 Looking back toward the West, this post marks the location of a change of direction for the property line.  Next we will be moving to the North along a barbed wire fence line.  The lower level of this ground covers the remains of the stone ridge.  Water seeps from the ridge into the filled area.  Large chunks of stone provide a dangerous but dry path when walking here.  The fill is shallow providing little room for tree roots to form a firm anchorage.  Wind thrown trees are common. Walking this part of the perimeter is not for the short-winded or the faint-hearted. 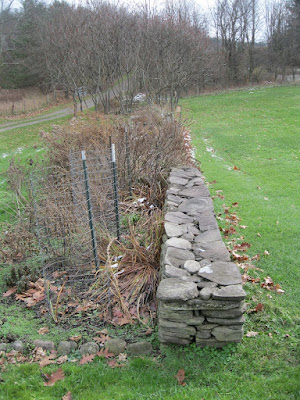 As one ages the certainty of a tomorrow becomes less sure.  The borders of our land are clearly described in the deed but difficult to find when walking about.  This first photo was taken with my back close to River Road.  The neatly mowed grass belongs to our neighbor and the edge of the dry stone wall is very close to the property line.  The deed describes this beginning as next to a telephone pole.  That pole has been replaced but part of it is still here underground.  The exact location of the property line remains undescribed since no part of the pole is identified as being the point of separation.  This neighbor is more than reasonable and we cannot imagine a problem here.  This is the Western edge of our land.  Moving South 150 feet toward the top of the photo brings us to a change of direction. 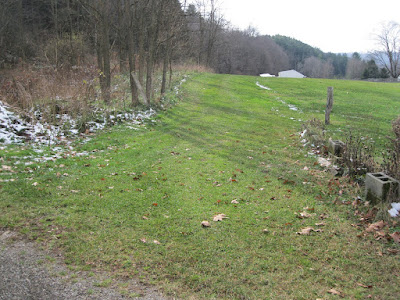 This lane's center line is the border between our land and two of our neighbors and defines the location of a right of way.  The short fence post to the right is in line with the missing telephone pole.  At one time a piece of steel pipe was driven into the ground to mark the location of the center of the right of way.  A now gone property owner removed that piece of pipe.  The view here is generally to the West. 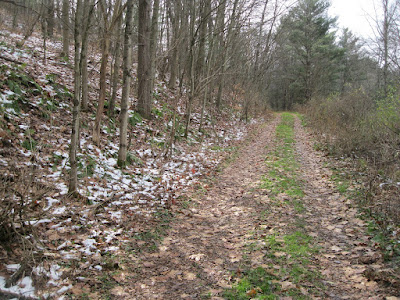 As previously mentioned this right of way separates the land.  Ours is on the uphill side.  Walking here usually brings to mind a poem written by Robert Frost.  This winding path covers 1,468 feet. 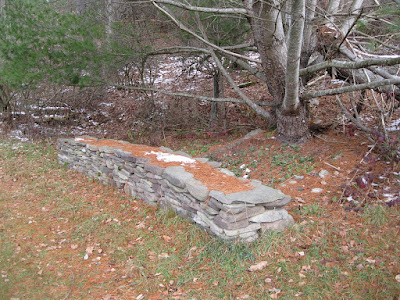 This stone wall was placed at the edge of the right of way to protect transplanted Arbutus plants.  One likely does not see the need for protection but a former property owner believed that the fence line separated our land not the center line of the lane as described in his deed.  He bulldozed away nearly twenty feet wide section of my land.  His religious beliefs made this acceptable since he saw a use for that land.  My wall continues to protect my plants and a later battle with me caused that land owner to sell both his business and home and move West. 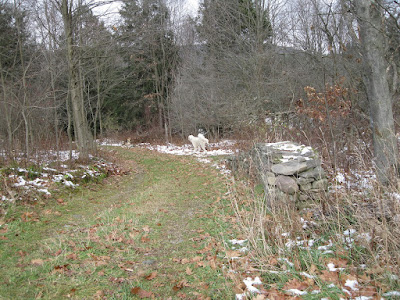