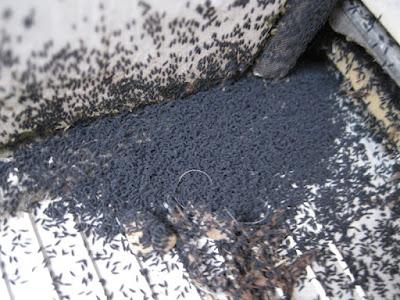 This has been the scene just outside of the basement door for the past several days.  We do not recall finding this swarming mass here previously.  Our past encounters with this life form have occurred during hikes taken when the snow pack was thinning.  Boot prints left in the soft snow on an earlier walkabout would contain several of these Springtails.  Their method of moving about is to snap an appendage on their underside sending them up and out with no control over the direction.  Landing on the sloped side of a boot print would cause them to tumble to the bottom.  Whatever became of them when bitter cold returned remains unknown to us.

This sizable collection is the result of the sloped surface of the ramp that leads to the basement and several days of moderate temperatures.  Snowfall is forecast for tonight so these creatures will be out of sight or gone by morning. 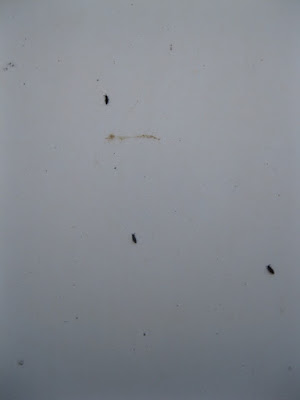 This closeup reveals some of the structure of the creatures.  Apparently some people have experienced populations of these hard to classify creatures inside of homes and see the need to eliminate them.  Ours seem to remain outside so we simply look and marvel at the diversity of life forms on this planet.

The snow expected to fall here did not appear but the temperature dropped to nearly single digits.  The springtails have completely disappeared from our door step.  They were pictured on the metal step beneath the door.  Each ridge in that step measures only three eighths of an inch. Those specks of black are indeed tiny.
Posted by Ed at 3:51 PM

Wow, that's quite a mass--fascinating, indeed! No, I'm not familiar with those. Curious that they made an appearance this time of year. We are in the deep freeze now, with only a little snow. I sort of wish we had more snow to protect the plants, but the soil is still somewhat warm and we are due to get a couple more inches of snow tomorrow. As for you, winter is just getting started.

I've never seen them in such a mass like that before, only occasionally in snow! Such fascinating creatures that I really don't know much about. I hope you have a wonderful 2018! Stay warm!