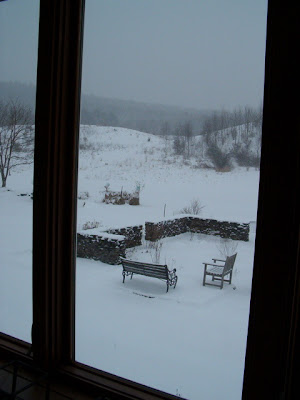 Yesterday, one of our most elusive neighbors made an appearance outside the bedroom window. Nine in the morning is an unusual time to see an eastern coyote, but when we are inside, the animals here make themselves at home here. I had to get the binoculars to make sure it wasn’t the gray fox that we sometimes see. The coyote walked past the compost bins and went up the path in the notch. After he got to the top of the path, he turned left and walked up the ridge. The silhouette of that beautiful animal against the sky was a sight to behold.

I wish I had a great photo for you, but just opening the window would have made him take off, and at that distance it would have been a “Where’s Waldo” picture anyway. So the best I can do is a picture of the scene out the bedroom window, and a link to a blog with great pictures of an eastern coyote. You’ll have to use your imagination for the rest.
Posted by Becky at 9:21 AM

me ann my camera said...

Glad you enjoyed the coyote picture. Thanks for the link. It sounds like you see Coyote more often than I do; mine was a surprise sighting one day when driving down a road and luckily I had my camera with me.

I also enjoy gardening and am anxious for spring to return. Looks like you must have a very interesting one.