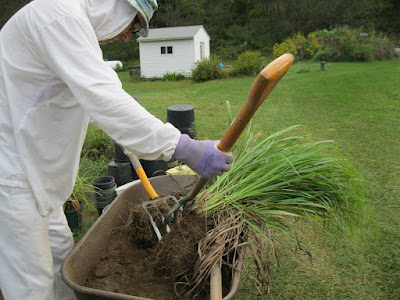 In this part of New York State, September frosts have become all too common.  Today was a hot humid scorcher but frost warnings have been posted for tomorrow night.  We insist on growing and carrying over plants native to the tropics.  One light kiss of frost will end them.  They need to be moved into the house now.

The first step in separating this plant into smaller pieces is to insert two spades into the root mass.  Lemon grass will divide easily once the tangle of roots have been pried apart.  Pushing the spade forks into the root mass is the most difficult part of this job.  One can almost hear the plant scream out. 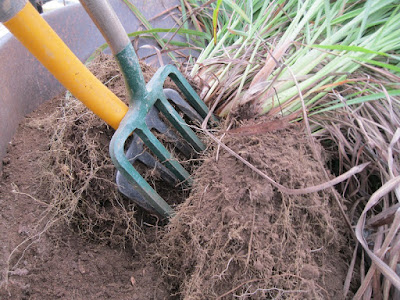 This clump of lemon grass spent the summer planted out as a garden plant.  Native to India it is accustomed to heat, floods and drought.  Here it experienced all of that and more.  We have found that it survives division and placement in a pot if it is watered heavily.  In this photo the two spades back to back are rocked against each other to pry the root mass apart. 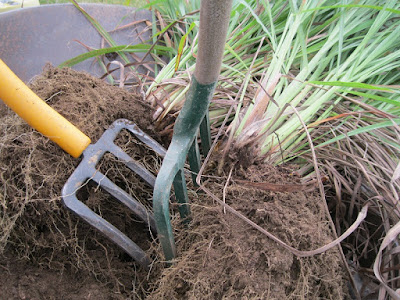 As violent as it appears, little damage is done to the plant.  With the root mass separated, gentle tugs disengage the crown.  The near spade is an English product made by Smith and Hawkins.  When Amy lived and worked in New York City she purchased this tool for us in Manhattan.  It rode with her as a subway took them to Brooklyn.  Then a ride on a commuter train headed north was part of a weekend trip home.  My spade is well traveled and is only used to divide plants.  We will not risk breaking it on heavier work. 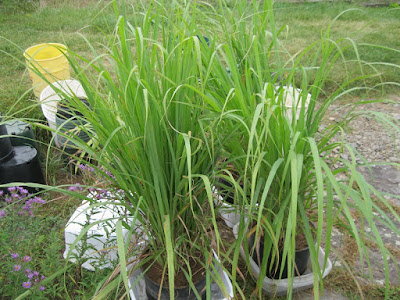 Two intact pieces of the original plant have been placed into three gallon pots.  Plants roots will quickly be pressing against the pot sides but the root mass is of sufficient size to allow its return to the garden in the late spring.  Now the pans full of water will give the transplant a generous soaking not unlike monsoon rains.  Tomorrow they will look as stately as they appear now.

These two plants will spend the winter on either side of the mostly glass front entry door.  Ample sunshine and active air currents there have always brought these plants through their season indoors in fine condition.  June seems so far away now but it will find us and these plants will return to the great outdoors.
Posted by Ed at 8:25 PM

Oh gosh, you do get frost earlier than we do. Ours usually happens in mid-October. But thanks for the notice, because I do need to start thinking about bringing some of the plants inside!