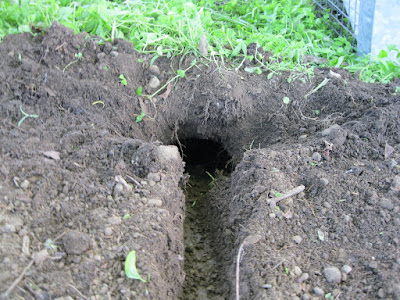 Yesterday Becky discovered a huge disturbance in the shade garden near the house.  Soil had been pushed some distance from a freshly dug hole.  Actual plant damage was minimal but the new tunnel provided easy entrance for a five foot long pry bar.  Several stabbing thrusts were made to try and detect the intruder. Feeling no resistance and hearing no screams of pain, we began to refill the tunnel.  As we were nearing complete replacement of the disturbed soil, water was poured into the tunnel.  Ten gallons filled the hole with a small pond at the surface.  When that drained away five more gallons were added. It took an additional six gallons of woodland soil to fill the hole and restore the garden surface.  A trap was set and we called it a job well done.

This morning a new hole was found.  This time very little disturbed soil littered the ground surface.  Could it be that the woodchuck had been in the hole the entire time that we were working to restore order?  The long narrow indentation running to the edge of the picture was made by the pry bar.  Today it only took three feet to find the end of the tunnel.  With the small amount of disturbed soil at the surface, the critter must have pushed soil behind him as he made his exit.  Four more gallons of mixed woodland soil seemingly filled the hole.  Now we wait. 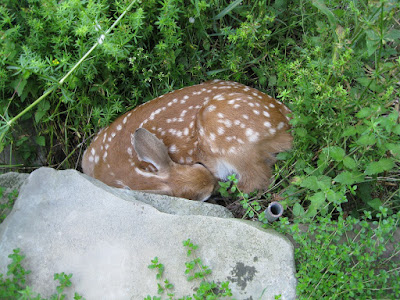 When I opened the shed door to get the pry bar, I did not notice the sleeping fawn.  When I returned to get the bucket of soil the deer was seen.  A quiet retreat allowed me to get Becky and her camera.  The only motion from the deer was shallow breathing.  We left the area as soon as the picture was taken.  This is the closest we have ever been to a deer.  That statement is wrong.  Last year a young buck with velvet covered horns wanted to be petted or have his horns scratched.  It took a long while to finally drive him away.  So here we are.  We think that this land is ours with considerable time having been spent to establish gardens.  Perhaps the wildlife are simply waiting for us to leave.
Posted by Ed at 9:22 AM

Breathtaking to find the fawn.

But the woodchuck - it's an animal I am not familiar with. Apart from digging its tunnel, is it a problem in other ways too that you have gone to such lengths to get rid of it?

What a magical experience with that fawn!

Woodchucks are vegetarians and eat huge amounts of plants. He sees my precious garden plants as breakfast, lunch and dinner and I disagree.