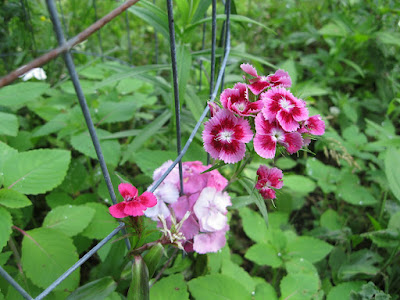 This area just south of the shade garden has experienced its initial weeding where we are trying to change wild ground into garden.  The Sweet William's stunning flowers are surrounded by uninvited plants.  Some of those are Jewel Weed which we believe the deer find unappealing.  After the flowers are past we really should remove the uninvited allowing the Sweet William an opportunity to spread.  We may remove all of the seed pods except those from the brightly tricolored plant. 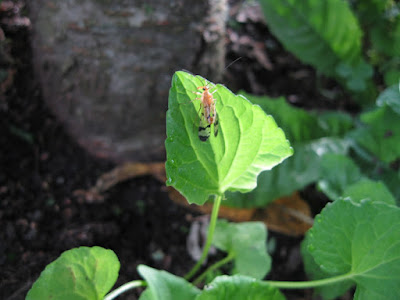 Becky has always had an eye that sees nearly everything.  It is highly likely that I would have walked right by here seeing nothing special.  Another part of the impressive is that when she returned to the house, she consulted her National Audubon Society book and rather quickly found their photo with the name of this unusual insect.  Scorpion Fly has an unusual appendage dangling from the front of its head.  Just what it eats and how it catches dinner remains unknown to us. 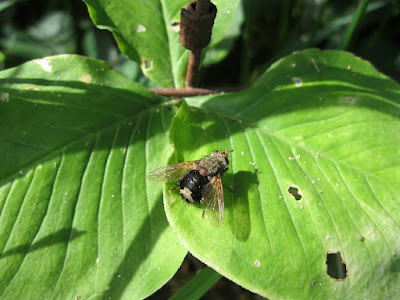 This vicious looking Early Tachinid fly has been noticed before.  It just looks capable of delivering a painful bite.  Once again the Audubon book provided us with a proper name.  That text describes this bug as easily spooked so we know not how Becky got this photo. 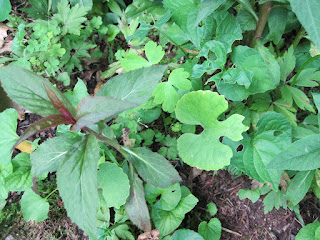 We view this jumble of self planted growth as truly special.  One of several such Cardinal Flower plants grow here.  The tall plant holding the lower left corner of the photo is Cardinal Flower.  To its immediate right is an odd looking leaf composed of two connected oval sections joined to an unusually shaped third part.  This is the highly elusive Bloodroot.  We are trying, with little success, to grow this native treasure while this one appears strong in the midst of many other plants.  Careful inspection revealed that both of these plants are growing from the same thimble full of soil.  Intervention is totally unwise so we will wait and watch to see what their future holds.  Given Cardinal Flower's growth habit of replacing one plant with up to six new plants next Spring each with a huge root mass, the Bloodroot may get crowded out but no way to clear ground for the Bloodroot could be found. 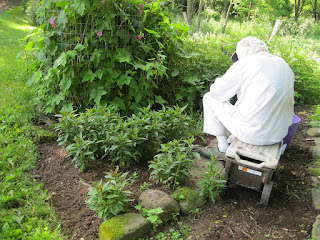 Here is the likely source of the errant Cardinal Flower seed.  The hooded gardener did plant these several years ago in his quest to find a location where this native treasure would survive with only a small amount of help.  Following snow melt, spent Chrysanthemum stems were spread across these evergreen plants.  Several harsh frosts blackened these leaves but they did put out new growth.  Plants from seeds are rarely seen here because their emergence usually happens in June.  Tiny new growth is seen as weeds and removed.  The seeds that blew to the other side of the path grew under the protective cover of other plants and did flower last year.
That clean line of separation between these precious plants and old pasture growth is the result of a visit from the seated weeder.  Blue Eyed Grass can be seen between his knee and the Cardinal Flower.  Becky rescued a single plant from the lawn in Unadilla and has been trying to grow it ever since.  Given its structural similarity to the much hated Quack Grass, its future here has been dim.  This year several were rescued and placed in this well cared for area.  Our timing was perfect and necessary water carried and  provided.  The transplants took a solid hold, flowered and are now growing full seed balls.  With no other grass like plants in the area, these may well hold a bright future.
Posted by Ed at 3:24 PM