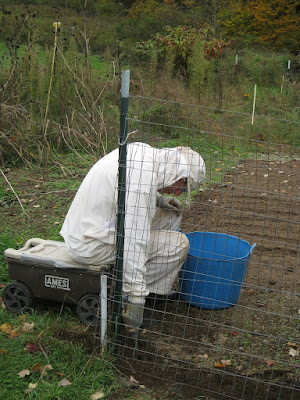 There is much to see in this picture.  Weeds are everywhere since we simply could not keep up this year.  In the distant past, I would work here under the blazing sun totally soaking my clothes with perspiration.  As the shirt dried concentric circles of white salt deposits appeared across the chest strongly resembling hippy art work.  The year before my cancers were found, I simply could not tolerate the heat anymore.  Now the time that I can work outside is severely limited allowing the weeds to spread unchecked.  This planting bed is eighteen feet long and five feet wide.  The Ames cart serves as both a seat and a tool box.  A hand cultivator with one tine works wonders in removing the weeds intact while deeply loosening the soil.  The blue trug transports the pulled weeds to a compost pile.  The white clothes both screen out the sun and discourage insects.  Strangers find my overall appearance troubling so we are seldom bothered by punks. 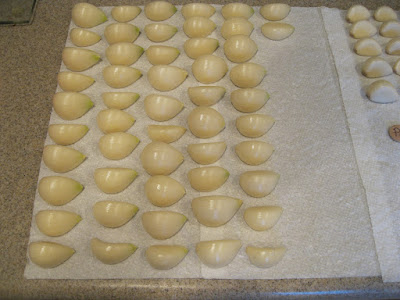 In response to garlic disease we now soak and peel the cloves.  A vodka bath completes the rot control.  The time needed to peel the cloves without causing damage is enormous but we have nearly eliminated the deadly fungus.  Before peeling, we relied on the appearance of the fully covered cloves.  Then the rot was so severe the problem could be seen or felt.  Now it remains small and hidden so we must search it out.

Last year's crop was planted in land that had not seen garlic or onions for a full decade.  We did grow infected garlic there once but felt that this ground would now be safe to use.  Wrong again.  We planted 40 cloves of garlic given to us by Helen.  Both the garlic and the person were special and we expected a good harvest.  All 40 cloves sent up strong looking growth early but then death swept across those plants.  We harvested only 6 plants and expected the worst when they were peeled prior to planting.  None of those survivors displayed any sign of disease and we simply cannot understand how that happened.  28 cloves were planted and we are hopeful that their miracle will continue.  Helen is no longer with us and we really want to keep her garlic growing here. 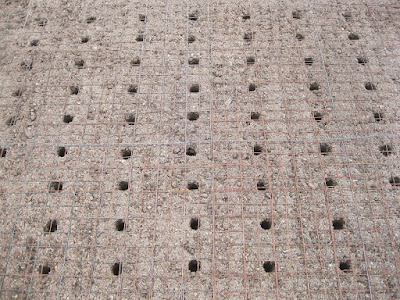 Former students may remember that I am a bit fussy about neatness.  Using two pieces of welded wire fencing with one rotated 90 degrees, a grid of two inch squares covers the ground.  Uniform spacing and straight alignment quickly follows.  Each row becomes home to 10 cloves and there are 21 rows. 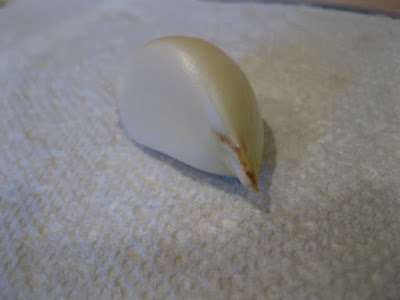 This infected clove is unusual in that the problem is near the tip.  Usually the rot forms nearer the base at the source of the roots.  This infection is so small that it would have gone undetected if the clove had not been peeled.  We found only three bad cloves from 170 peeled until we got to the last variety.  The forty White Bishops gave us 6 disgustingly rotten cloves.  Here is another puzzle since the plants looked great at harvest and the bulbs felt solid.  So once again we have planted peeled cloves that also were soaked in vodka just prior to planting.  I do not know if the purpose of the vodka was to sterilize or to make the cloves happy.
Planting vegetables as winter approaches is unusual.  That is a factor in what makes garlic so special to us.  The plants will appear when it is way to early for garden planting.  An appropriate end to this year's garden and an early promise of the start of the next garden.  Our usual planting time was closer to mid October to coincide with my father's birthday.  Conditions seemed perfect to plant early and I am confident that he would have approved of that decision.
Posted by Ed at 10:10 AM