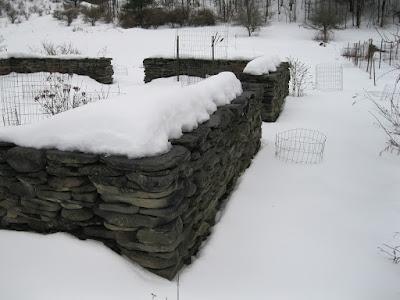 In this part of New York State, a midwinter thaw is common.  It is so common that it has an easily recognized name, the January Thaw.  This is the first winter in my memory to have completely missed that event.  We have been denied the experience of walking our garden paths and inspecting just how our treasured plants are dealing with this period of hidden plant activity.  Our Cardinal Flower plants are now growing  low rosettes of brilliant bright green leaves but we cannot see them this year.

The pictured stone wall was built on a north south line with its exposed side facing west.  Since our eastern horizon is much higher that the western, more daylight warmth is captured on the western side of the wall.  This difference in the amount of sunshine can be described by our habit of walking to the base of the lane to see moon rise.  From that location we see the rising moon nearly one full hour earlier than what can be seen from this garden.  Add to that the observation that our morning skies are usually cloud filled while sunshine sometimes fills our afternoons.  This explains the relative lack of snow on one side of the top of the wall. 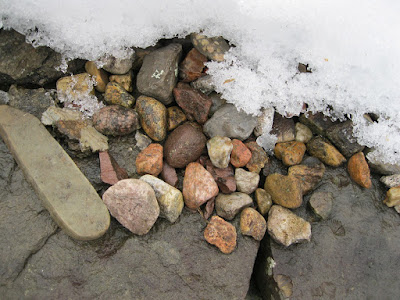 This edge of the wall into our basement also has a western exposure.  Since the feeling in my lower legs is growing weaker, I have developed the habit of seeing each step before I take it.  Not only does this help keep me from falling, but sometimes I see interesting stones.  Our bedrock is mostly formed of fine mud washed westward from enormous mountains that are now long gone.  The gray sedimentary wall stones show a general lack of any interesting feature save occasional marine fossils.  When the glaciers formed our river valleys, they brought with them metamorphic stones frequently of a more interesting color.  I simply cannot resist picking them up.  The long thin gray stone might have been a Native American scraper. 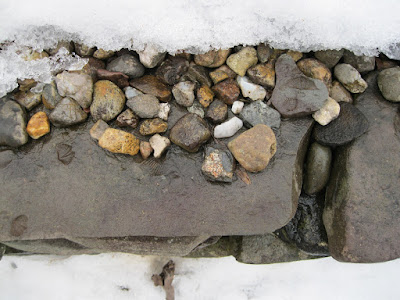 Fossils can be seen in the top wall stone.  I have tried to get help identifying the composition and names of these different colored stones.  The occasional chunk of coal was most likely carried here by the New York, Ontario and Western Railroad  that ran a branch line on the opposite side of the Unadilla River.  So far the identity of these colorful stones remains a mystery.

My editor may remove this last paragraph.  I had other timely photos that might fit here but I decided to keep them between my doctor and me.  At nearly seventy-seven, many changes have happened.  One is the purple bruises that frequently mark the backs of my hands.  Until last week I have avoided tearing any of this weakened skin.  That changed when the back of my hand lightly contacted the bottom of a freezer shelf.  A photo sent to my doctor resulted in a same day morning appointment.  His repair work wildly exceeded my expectations  but he said that three weeks would be required before the healing would be complete.  So I sit and wait but one week in everything looks great.

Oh dear, take it easy with your torn skin. Your property is so beautiful in every season. I'm getting tired of loads of February snow, too. We had a pleasant beginning to our winter, and then all heck broke loose when the polar vortex started wobbling. Loads of snow all at once, and then subzero weather for days on end. I'm ready for spring, and as you say views of the emerging plants for the new growing season.