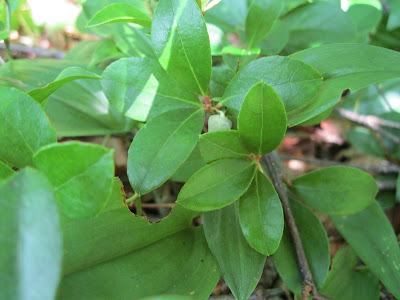 Wintergreen, Gaultheria procumbens has proven completely resistant to cultivation for us.  When we were initially exploring our new land, wintergreen was discovered growing on a steep slope that had never seen the farmer's plow.  Wild blackberry plants seemed to be overpowering the wintergreen so they were removed.  That amount of soil disturbance sent the wintergreen into decline.

Just recently a sizable patch of wintergreen was discovered adjacent to the lane.  Hiding in plain sight, its existence there had escaped us for years.  This location is again on a slope where the bedrock lies just below the surface.  The farmer never tried to plow this area.  We will make no attempt to alter conditions here.  This wintergreen will remain wild and free. 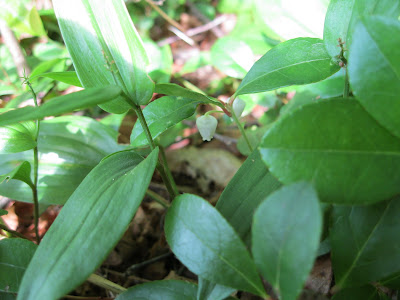 When I first spotted these waxy white flowers, I thought that they were only buds.  On a second visit a bumble bee flew away from under the bud so a closer look followed.  Growing near to the ground, these tiny lanterns are indeed fully open flowers.  Wintergreen leaves are themselves aromatic so it would be impossible to separate the scent of the flowers, if any exists, from the flagrance of the leaves.  Even if I retained any youthful flexibility, it would be some trick to get the nose that close to the ground. 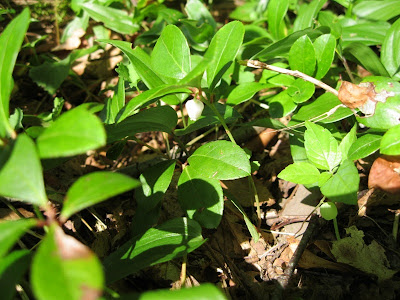 Full sunlight brings both the flower and the leaves to their best appearance.  The young blackberry plant in the lower right corner will remain as I have sworn to leave this area alone. 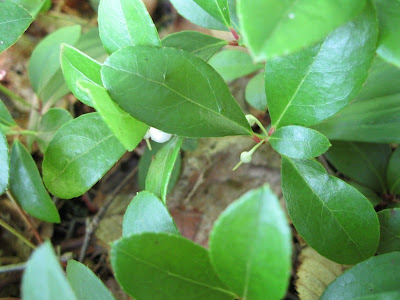 The twin berries show that I nearly missed finding flowers this year.  Next year I will begin to look here in early July to get a better idea when the flowers first appear.  These pictures were taken on July 21st.
Posted by Ed at 9:24 AM