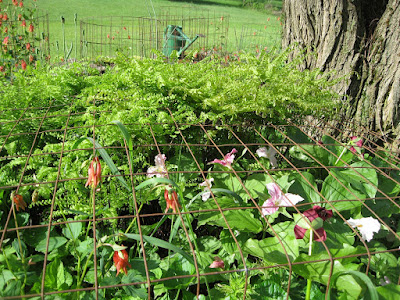 In many ways these purple tinged Trilliums look completely different from their initial form showing pure white flowers.  These transplants have held this ground for many years now producing blossoms sized much like the native plants across the river.  Maidenhair ferns in the immediate background have also been here for a number of years.  Somehow these plants cover and hold their ground.  It is the result of luck not skill.  The general area is also home to a large number of violets which pull the deer in for a tasty snack.  The wire cage is intended to keep the deer foot prints away from this ground.  Not native but it works. 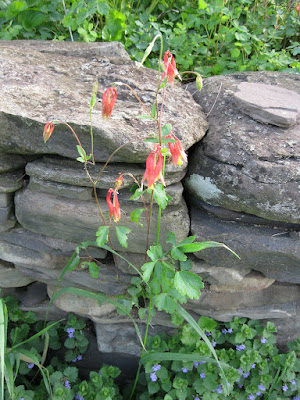 Decades ago daughter Amy and I were hiking at the Buttermilk Falls park near Ithaca.  A sharply sloped shale ridge was home to a huge group of Columbine plants.  How these plants were able to send out roots into tiny cracks in the stone wall remains a mystery.  This single from seed plant growing from our drystone wall serves as a reminder of the day we happened on generously flowered cliff face.  The Ground ivy is viewed as an invasive pest but it does have blue flowers. 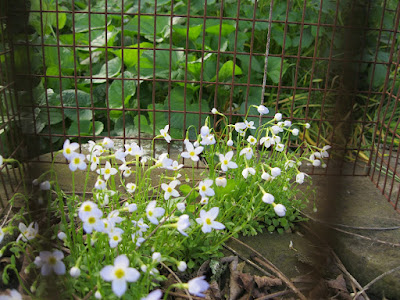 Bluets have a long history here of resisting our efforts to grow them.  This small group is inside of a small mesh wire cage but they are self planted on the horizontal surface of the stone wall.  These plants were originally taken from a sloped lawn that was moist from a septic dry well.  Subjected to mowing and dampness they thrived.  We have been largely unsuccessful in our many attempts to grow this plant.  These will stay caged where they are while we look for new from seed plants in the immediate area. 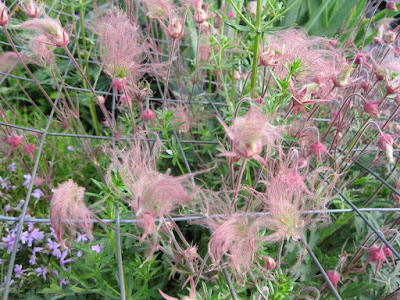 Prairie smoke is a Great Plains native that has held this spot near the house for a few years.  These after the flowers airy presentation is just super.  We do not know if the cage is necessary but why risk removing it? 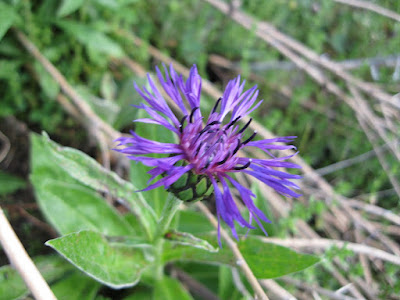 It has taken several years for this Perennial bachelors button to hold its ground  The initial transplant appeared to have died but a low cluster of leaves could be seen during the second year.  It took awhile for the plant to reach a size that allowed blossoms.  Some care is needed to remove nearby weeds. 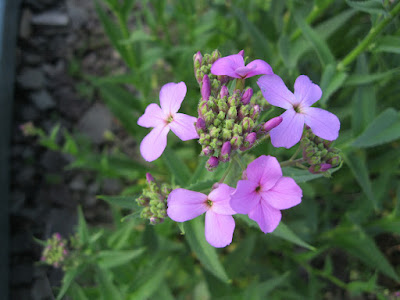 It seems that we hold a fascination for ditch weeds.  Dame's rocket seems to be everywhere alongside of any road.  It resists transplantation since it has a hefty tap root.  A true biannual, it shows a large coarse robust circle of  close to the ground leaves in its first year.  The explosion of growth in its second year features a variety of colored flowers.  We keep it in our garden by allowing plants from seed to grow in the stone paths between planting beds.  How could anyone not see these blossoms as desirable? 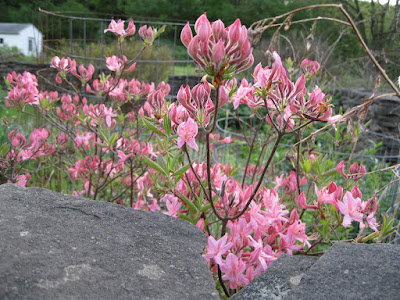 Pinxter bushes are more than welcome here.  When we still had a sense of smell, the calming effect of these flower's scent was a real mood booster.  Their growth habit of open flowers ahead of leaves  is unusual but the number of blossoms is amazing. 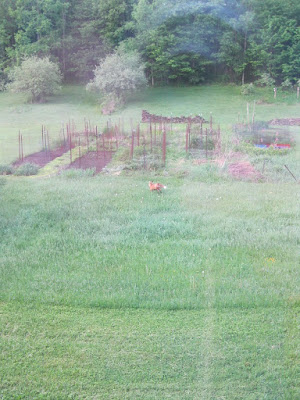 The fox has not been seen here for quite some time.  Its right front paw has sustained an injury.  Every step features a limp but when it is time to move on super speed is still possible.  When this animal was first sighted a slow walk straight toward the window was attempted since past movements inside of the house have sent the fox running.  It was in the freshly mowed lawn when first seen but my movement sent it away.  Several days after this picture was taken we came upon a dead fox in the road.  We were about four miles from here when we encountered it and hope that it was not the one that hunts here.
Posted by Ed at 11:52 AM