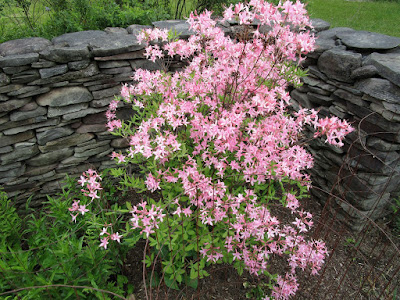 Pinxter is a native plant that captured our interest many years ago.  It has been in our garden for more than one quarter of a century since it became ours while I was still teaching.  Pat and I worked together and she knew of a location where I could snatch this plant.  Initially it was placed in the woods but that location was dry.  The plant did not die but it did not grow either.  Moved inside of the stone wall, it found the moisture released nightly by wall stones following hot summer days adequate and has increased in size.  Wire cages fill this area each winter to prevent deer from eating the fall formed flower buds.  The scent released by these flowers is sweet beyond description and always calms my mood.  This plant is without question a treasure and we always remember Pat for sending this plant our way. 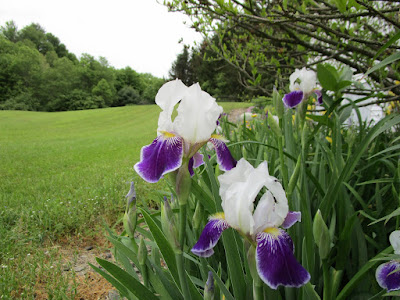 This old fashioned Iris also has a personal connection to us.  Becky's maternal Grandmother grew this plant in her garden located in Gatchellville, Pa.  Whenever her family moved, Becky's Mother took some of this plant with them.  Now it is with us.  This plant has a number of positive characteristics that set it apart from more modern plants.  It is hardy and not troubled by disease like more modern varieties are.  It is sweetly scented and extremely hardy.  One of our older clumps is in desperate need of division.  Then there is the thin white line that edges each petal.  This is without question an attractive flower. 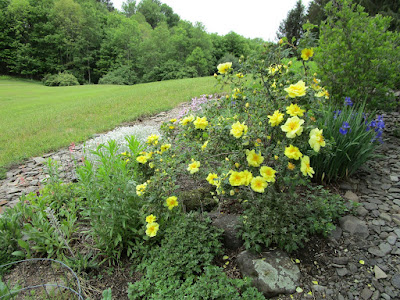 As with many of our plants, there is a personal connection that brought it into our gardens.  This Rugosa rose was a gift from Elle   Early on she helped us in so many ways.  That history dictated that her rose be placed prominently directly in front of our home.  She also gave us a red rose that we have since lost.  One of the planting beds that has been taken over by tenacious weeds still sends two single rose stems toward the stone path.  Perhaps this will be their year of their rescue and one of them might have red flowers after the plant is given adequate care. 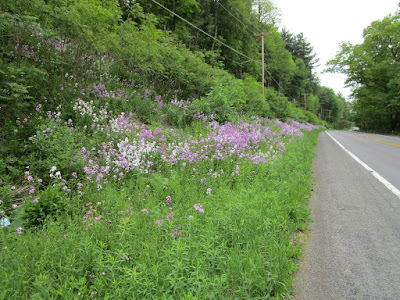 This section of NYS route 8 passes next to the retaining wall for a bridge abutment where the NYO&W Railway crossed over the highway.  It can be seen on the left edge of the road in the distance.  This occurrence of the non-native Dame's Rocket is extensive.  Much hated by natural plant purists because of its vigor, we remain drawn to it by both its beauty and tenacity.  Its evening scent is also a huge point in its favor.  As a result, we intentionally introduced this plant into our gardens.  Why then did I go roadside to get decent pictures? 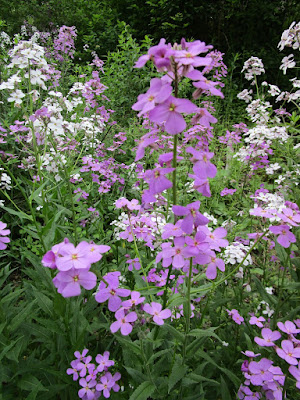 This plant is a true biennial.  Its first year of growth consists of a low rosette of leaves supported by a deep taproot.  These young plants fill both our planting beds and the stone paths between them.  We will have a generous display of mostly purple colored flowers next year but this year is nearly empty.  To break the cycle of flowers every other year, plants would have needed to be brought in for two consecutive years.  I simply did not take the time to guarantee great displays every year.  We do have a few plants in flower this year so eventually the problem will self correct.
Posted by Ed at 4:07 PM

I know; I want to hate Dames' Rocket, but it is beautiful. Your Pinxter is beautiful, too--what a great spot!