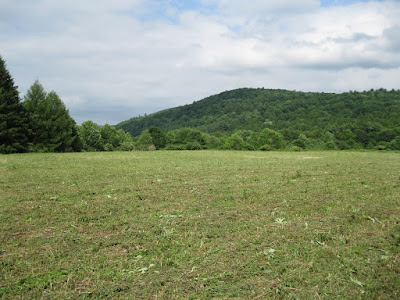 A little more than twenty-six years ago, we took the next step toward our life in retirement with the purchase of the last piece of what had been a colonial farm.  This land was unsuitable for productive farming as the last glacier to shape this ground left it heavily filled with stone.  We call this the High Meadow as it is the highest ground that we own.  Steep slopes drop down to three other flat meadows that lie at different elevations on the south side and a dead ice sink forms the hole to the east.

The bedrock ridge in the background is not ours but we sought and gained permission to hike there.  We did set foot on the highest ground in the photo when we were younger.  This area consists of several square miles of mostly forested ground that is crossed by only one road and it is not open in the winter.  Local legend places mountain lions and wolves here and there has been a recent sighting of a moose close by.

When we purchased this land it had not been farmed for many years.  Several horses spent their summers here confined only by a perimeter fence.  Their free range kept plant growth in check.  We have witnessed the return of trees, bushes and Goldenrod that now limit our movement.  I mow trails and two of the meadows but this one had gotten out of control.  A reliable friend restored order here with his bush hog.  The Milkweed will regrow in time to support the last generation of Monarch caterpillars for this season so all is well here. 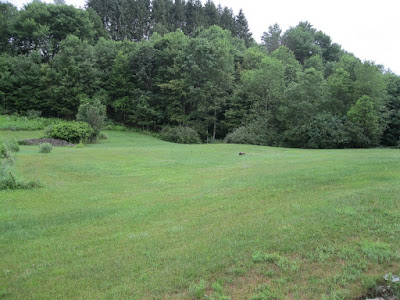 This field is north of the high meadow.  The high row of pine trees are in both pictures.  When we first came here this steep slope was largely treeless and quite frankly looked horrible from where we planned to build our house.  We did place a bench at the end of what would become our garden and each day's work ended with time spent sitting on that bench.  One day a coyote had crossed the High Meadow and started down the steep slope.  When it saw us a quick retreat took it back up the hill and out of sight.  Crawling toward us on its belly, its head appeared and it gave us a long look.  Its wilderness home had been invaded by people. 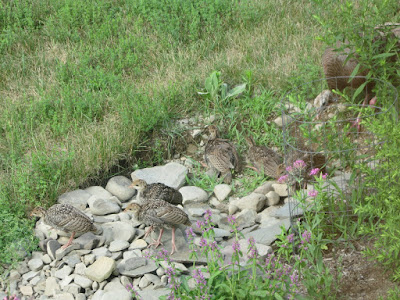 These young turkeys are enjoying a dust bath in the bare ground recently exposed in order to finish the stone path and planting bed directly in front of our home.  Two mature hens are raising their broods spending a great deal of time where I mow.  On occasion the dust baths dislodge garden plants but the turkeys presence here is a real plus for us. 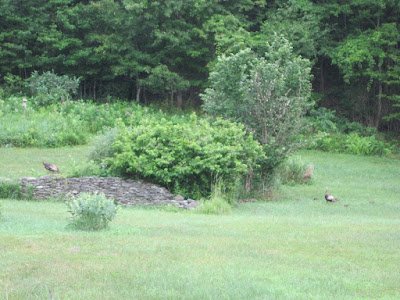 This curved stone wall is just one of many projects that remain unfinished.  The sloped ends provide easy access for several different wild animals.  Our resident fox is sometimes seen surveying its home from the high point of the wall.  Recently we saw one of the mother turkeys encourage the young to follow her up the wall.  There she showed her babies how to flap their wings and they quickly understood the lesson.  When mother turkey flew to the ground each of the young followed her.  Imagine, we got to witness a mother teaching her young how to fly. 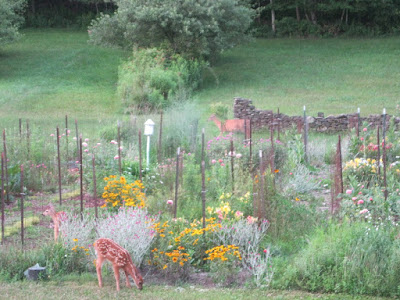 The turkeys are not the only ones to see our lawn and woods as a safe place to raise their young.  Presently two does and three fawns spend a great deal of time within sight of our house.  The posts and wire fencing keep the deer away from many of our crops but much vegetation figures in their meal plan.  Mom and the twins are all within sight as they stroll across our garden.  After the picture was snapped, forceful verbal encouragement to leave resulted in their long slow looks at us followed by an annoyed walk away.  They seem to understand that we pose no actual threat to them but their time in the garden is limited.  How could a wilderness lifestyle not include nature's creatures?
Posted by Ed at 1:05 PM