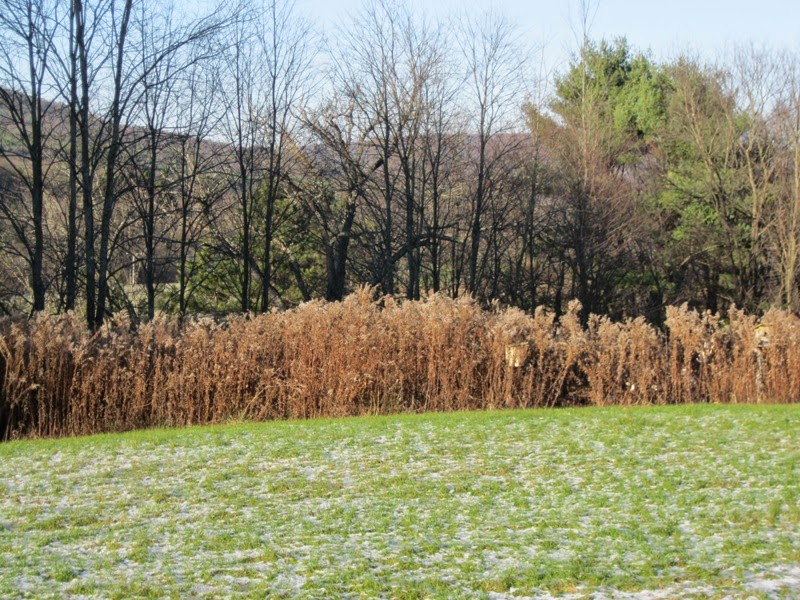 I awoke this morning expecting this to be an exciting day.  My new stove was going to be delivered and I was cleaning in places that haven't seen me for years.  I just happened to glance out the kitchen window above the sink.  I saw movement along the edge of the  grass where it meets the goldenrod. My immediate thought was a Bobcat.  I have never see one outside of zoos.  Unable to contain my excitement I called Ed, but of course the animal was gone before he arrived.  Ed came and while I was explaining where I thought had seen a Bobcat, two Bobcats appeared.  Ed and I both got to see them and there was no question.  Picture a big house cat only with a much heavier body.  These cats were light golden brown with spots and black markings.  Their tails were short and wide, sort of rectangular in shape with more black markings.  No house cat tail would look like that even if it was cut short. They looked to us like youngsters.  They quickly disappeared into the path in the tall goldenrod just to the right of the bluebird house.  Apparently they are seldom seen so we were very lucky indeed to see two such beautiful creatures.  As of now we have no Bobcat photos.  We will watch our chance.  Perhaps it is wishful thinking to think we can get a picture.  We will be very lucky just to see them again.  We have quite a buffet of rabbits, mice, moles, voles and chipmunks around the garden.  We wish them good hunting.

My new stove was delivered and I am thrilled .  It will be even more exciting when the gas company comes tomorrow to install it and I can use it.  For now, Ed will be carrying the camera on his walks.  Since the animals moved from the pine trees to our field lawn, it is possible that they are using the old fox den there for shelter.  Maybe we won't see the Bobcats again but snapping a great photograph of them would be so exciting! 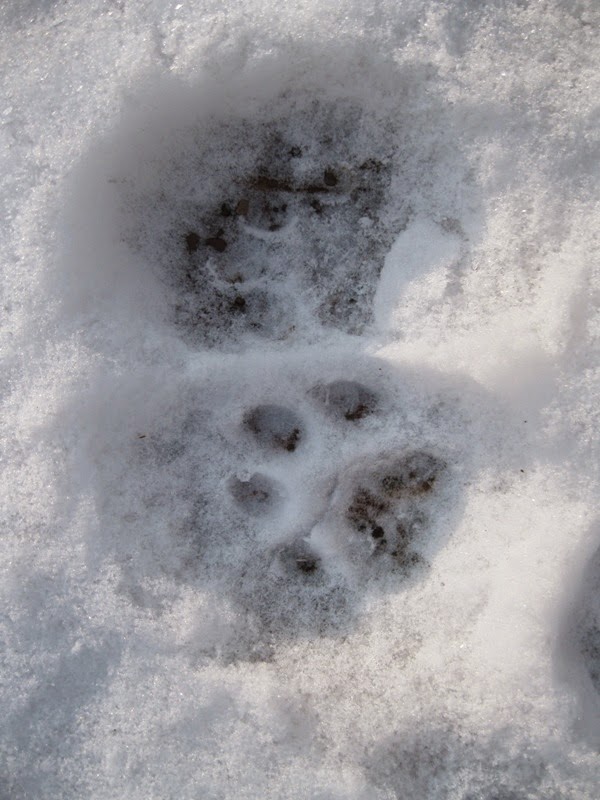 Our usual dusting of overnight snow recorded the presence of our resident bobcat cubs searching for breakfast.  Four toes and a pad point to feline tracks.  It seems that their fifth toe is higher and to the side of the paw.  It may approach an opposable thumb in actual function.  The thinness of the fine dry snow cover made finding clear prints difficult.  Steps taken in the vegetation lacked definition.  Underlying stones confused many of the tracks left in the driveway.  Only one photo was clear enough to be usable but one was all that we needed.

Bobcats are described as common but wary and elusive.  For that reason they are seldom seen and pictures of wild specimens are not common.  An abandoned fox den at the base of a pine tree might be serving as temporary quarters for these cubs.  A stealthy check on the den yesterday revealed nothing but I am persistent.  Had I remembered to take the camera on my walk to the mailbox, I would have found nothing at the den since the cubs had already gone to work.  My chances of finding them home are better when the afternoon trip to get the mail is made.  They tend to rest during the middle of the day.  I've started doing some of that myself.
Posted by Becky at 3:46 PM

Oh Becky what a sight to see....I would love to catch a glimpse of them but we only have fox here so far. I hope you do get a picture!

A bobcat--wow! Someone in the town I grew up in (central Wisconsin) found a bobcat in his basement one day. I don't remember all the particulars of how it got in there, but can you imagine?! Anyway, that would be exciting to see one in the wild and to find a paw print!