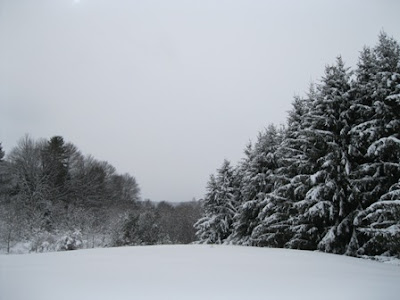 Yesterday was filled with a real winter storm. What was predicted to pass well to our north hit us with an all day snow event. Sheer beauty is no longer enough to keep away the whine. Three bald eagle sightings during two days of snow removal did that trick. I was plowing across the lane looking in the direction of the first photo when a mature bald eagle, flying low and slow, passed directly over me. When it cleared my view a second eagle also flew right over me. As a child in the 1950's I never saw a bald eagle. DDT had pushed them to the brink of extinction. Now there is a breeding pair hunting in our river valley flying directly over our homestead. Today while I was releasing my truck from winter's grasp, an eagle flew over so low that it had to swerve to go between two trees. These are rather small trees less than two decades old so I was extremely close to the eagle. Were it not for the snowfall these magnificent birds and I would not have been in such close proximity. 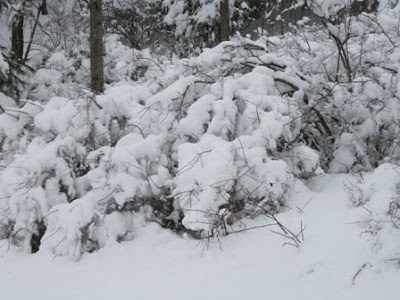 Heavy wet snow has bent the blueberry bushes low to the ground. Late frost and early drought have denied us a blueberry crop for the past two years. Warm rain is predicted soon. If it happens, our bushes will be released from this heavy load. We were planning on a bumper crop this year. 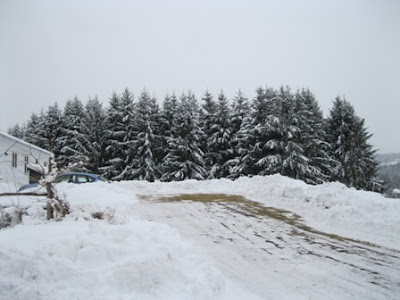 One more view of snow plowed with my lawn tractor is required. How snow is piled this high with my tiny John Deere remains a mystery to even me. The plow is showing signs of wear but it has plowed more snow here than it was ever designed to do. Perhaps a new plow will be needed for next year. If it was only that easy to do something about my shoulder made sore by repeatedly raising and lowering the snow plow, we would really be ready for next winter.

We got more snow too. The way I am counting there will only be two more storms before an early spring. And one of those storms is predicted for next week. The road crew is dubious about the early spring prediction and are just hoping the equipment lasts through March.

we got another foot here as well but we are in for a melt..my blueberries are usually destroyed by hungry rabbits who love to eat the young bushes so they never get big...

I never see snow by my sight, because my country only has two seasons. Your photos are very beautiful. Hope someday i can go abroad to the country that has 4 seasons.