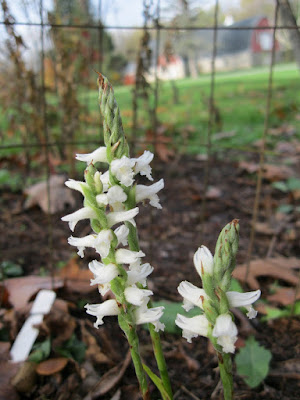 At this point it's not easy to find beautiful flowers hiding among the fallen leaves.  However my Fragrant Lady's tresses, Spiranthes odorata, did not disappoint.  Granted they were a bit earlier and a little larger last year, but this is 2020.  I am thrilled to just see these lovely little native orchids again. 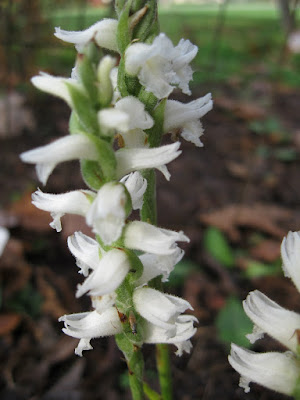 The individual flowers are small, about one-half  an inch in length.  I love the way they spiral up the stem opening from the bottom to the top.  I wish I could tell you that I got a whiff of the fragrance, but the stems are short this year and I was lucky to get close enough to the ground the take the pictures.  Because we keep a cage around these flowers the wind and falling oak leaves have already mulched these plants.  So far they seem to ignore the cold so I still hold out hope that there will be flowers into November.  Whatever happens it sure made me happy to see my lovely orchids today.  It is only right I should share their beauty!
Posted by Becky at 4:58 PM No comments: 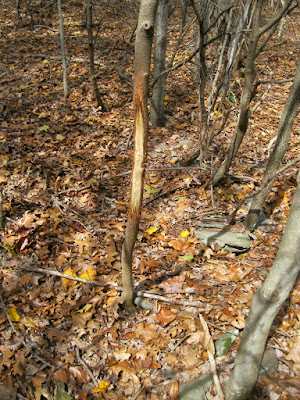 We have occasionally seen a young buck mixed in with the does and their fawns that seem to live here.  This buck is protected by NYS game laws which require at least three protrusions all of which must exceed one inch in length before it can be hunted.  This young stud only carries four points in total on both antlers so he is safe from hunters unless they are children.  Initially the antlers are covered with super soft appearing velvet.  When the antlers firm up the velvet must be removed by rubbing against small tree trunks.  Tree bark is removed in the process.  The tree in the right foreground carries the healed scab from an older rub.  Our authorized hunters were pleased to find this unmistakable sign of the presence of a male deer.  Perhaps a larger older male will take his gathering of potential mothers. 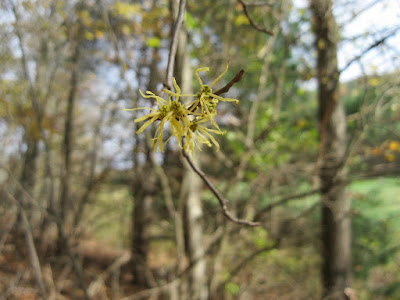 While tramping around looking for the buck rub, we brushed against Witch-Hazel branches.  The late in the year occurrence of flowers is this plants claim to fame.  We would like to have one of these trees under cultivation but digging a tree in our stony ground would likely kill the tree and injure us.  These specimens will be left to grow where they were planted.  It appears that last night's hard frost took most of the shine off of these flowers. 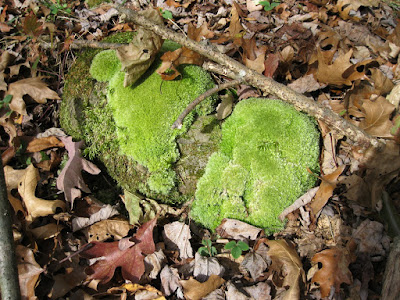 This moss is an absolute marvel.  How it can appear this bright at this time of year is a question without an answer known to us.  We purchased a moss book in an attempt to learn the names of the many mosses that grow here but we made absolutely no headway.  Moss names are incredibly long with the words providing no clue about the name.  So we are limited to simply expressing our appreciation of their bright color on a cold day. 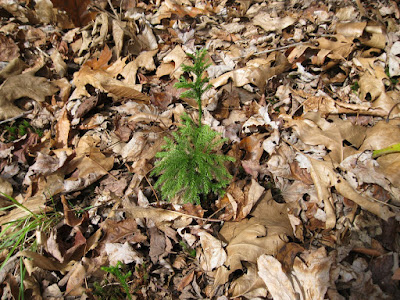 Princess Pine is in a different class name wise.  Its growth visually resembles a small pine tree.  How could any plant so demure not be called a princess?   We would like to transplant this species but all we can find on that subject is descriptions that say transplanting is difficult with no explanation of why that is the case.  We suspect the the long somewhat deeply placed horizontal rhizomes connect with a mother root.  Without a connection to the vertical root, the plant piece may well perish.  To date we only visit this plant where it grows. 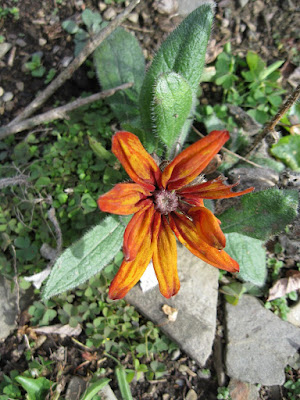 Back at the garden, we found this Gloriosa daisy flowering way out of season.  We found it to be a promise of what is to come after we both survive another winter.