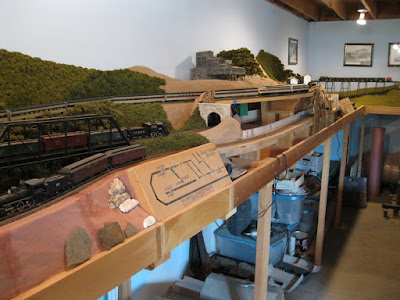 Becky and I have owned our retirement land for more than twenty-five years.  In that time I have had three near death experiences.  In light of that reality, we hold the belief that we have enjoyed life in this isolated rural setting far longer than we had any right to expect.  Now we are facing the undeniable reality that the time to move to new housing is drawing close.

Model railroads have been a passion of mine since childhood.  Our new dry basement with a high ceiling looked perfect for a model railroad.  The New York & Ontario and Western was to hold a major portion of the model.  Some space was also planned for the Delaware & Hudson.  Both railroads operated in this area.

This long view features a bridge crossing the Delaware River in the foreground and the legendary steel trestle in Sidney Center.  The Lackawanna passenger train is totally out of place here but its picture was desired before the auction. 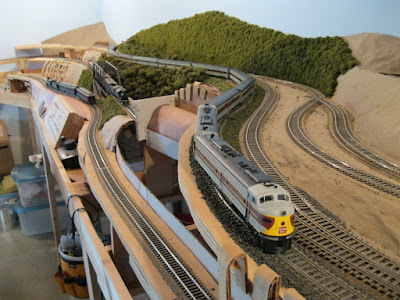 This view shows just how this layout was built.  Since this blog focuses on our gardens, mention must be made that Autumn Joy sedum stems from our garden were used to grow the model trees. 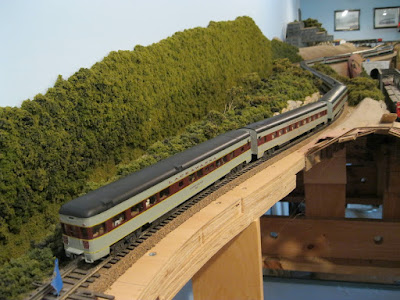 The Pennsylvania coal mine belongs here.  Pictures on the far wall show the real Sidney Center bridge.  The passenger train is totally out of place. 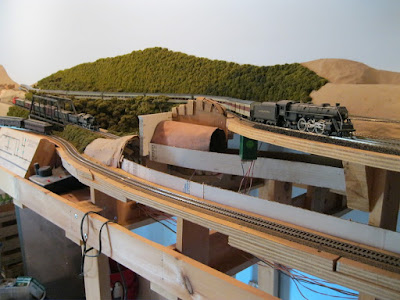 I find it hard to believe that this steam engine did the work that later used two diesel engines.  The cardboard guard rails were meant to prevent trains from falling to the floor should a derailment occur in the tunnels.  A cloth drape would have been hung from the edge framework but we never got that far. 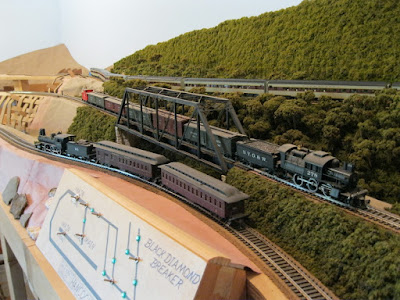 This control panel was lettered by my older brother.  Directly above it is a Unadilla Valley Railroad passenger train similar to the real thing that ran just across the Unadilla River from our home.  The milk train crossing the bridge illustrates a major commodity moved initially by railroad in this section of New York State.  The Lackawanna train is totally out of place here but it sure looks good. 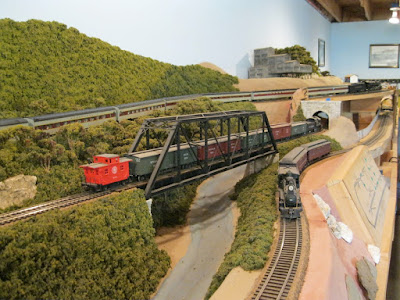 This view shows the river.  The sandy area near the bridge abutment was a popular location for wild beach parties.  Each of the milk cars were scratch built using basswood structural shapes following  plans that I drew.  The lettering on the prototype cars was yellow but no decals could be found in that color.  Part of today was spent placing the Lackawanna train in a box that is now ready to be sent to the auction house.  Perhaps by the end of winter all of these models will also be ready to go.
Posted by Ed at 4:18 PM

Awwww. End of an era. Onward to the next adventure.
L